English
In Search of the Castaways is a 1962 Walt Disney Productions feature film starring Hayley Mills and Maurice Chevalier in a tale about a worldwide search for a shipwrecked sea captain. It was directed by Robert Stevenson from a screenplay by Lowell S. Hawley based upon Jules Verne's 1868 adventure novel Captain Grant's Children. It was Mills' third of six for the Disney Studios.

In company with her younger brother, Robert (Keith Hamshere), and her elderly yet young-at-heart friend, Professor Jacques Paganel (Maurice Chevalier), teenage Mary Grant (Hayley Mills) journeys to Glasgow, Scotland, to persuade the comically brave Lord Glenarvan (Wilfrid Hyde-White) to rescue her shipwrecked father, Captain John Grant (Jack Gwillim). The expedition sets sail and ventures halfway around the world, to both South America and New Zealand, respectively. The party suffers many assorted perils including an earthquake, a flood, a fire, an attack by a giant condor and an erupting volcano before finding and rescuing Captain Grant. A subplot involves a gunrunner named Thomas Ayerton (George Sanders), who is a treacherous former crew-member of Captain Grant's ship, and responsible for his disappearance. Another subplot involves a budding romance between young Mary Grant and Lord Glenarvan's handsome and loyal son, John (Michael Anderson, Jr.). 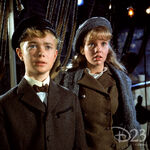