Disney Wiki
Register
Don't have an account?
Sign In
Advertisement
in: Vehicles, The Incredibles, Transportation,
and 3 more
English

Back when Bob Parr was still the superhero Mr. Incredible, his main form of transport was a large car known as the Incredibile, that could transform from a stealth mode normal-looking black sedan. It has silver horizontal stripes on its sides, and two vertical blue stripes on its hood with a negative black lowercase "i" and a red dot located between, mirroring the design of his super suit.

The Incredibile has a jet turbine on its rear that turns into a spare tire and a long, pointed hood that retracts itself to make itself flatter when in "stealth mode." Its onboard features include a built-in GPS system that can help Bob track down enemies, a mechanism that can change him into his Supersuit, and a red "Boost" button that allows the car to go faster. It is also shown to have an ejectable passenger seat. The car has several driving modes, which suggest a greater array of capabilities. It is never explained what happened to the Incredibile after Bob and Helen were married and had kids.

He is first seen driving this vehicle while trying to help the Police track down a criminal on the run, only to be distracted by an old lady who is trying to get her cat down from a tree. Mr. Incredible helps her instead by uprooting the tree and knocking it over, therefore getting the cat down, and then uses the tree to crush the car of the criminals he was supposed to catch. After getting back into the Incredibile, Mr. Incredible finds a young boy named Buddy Pine (who will eventually grow up to be his archnemesis, Syndrome) already sitting next to him, telling him that he wants to be his sidekick. Bob tells Buddy to get out of the car due to him claiming that he works alone (and hence fueling Buddy's eventual villainy). Later on, after saving a passenger train from falling off a bridge destroyed by Bomb Voyage, Bob drives the Incredibile to his wedding to Helen. After supers were outlawed due to a plethora of lawsuits, the Incredibile was soon confiscated.

The Incredibile was discovered to be still intact after fifteen years, and in possession of a wealthy car collector who bought it from a private auction. According to Bob, he was informed by some unknown group that his car was irrevocably damaged. He still had the remote to the car and tried to retrieve it, only to be stopped by Dash, eager to try out the vehicle for himself. Not wanting to deal with an angry rich guy, Bob stopped Dash. When the hypnotized Supers came after Dash, Violet, and Jack-Jack, Dash summoned the car, and Frozone actived its voice recognition, enabling the Parr children to use it to escape and reach the Deavors' ship The Everjust to rescue their parents. The kids ejected themselves from the Incredibile to enter the ship. Following Evelyn Deavor's defeat and arrest, a seaweed covered Incredibile pulls up to the Parr family.

At the end of the film, in addition to a new red paint job, it becomes the Parr family's primary car both in outings and hero work.

The Incredibile in Skoda Fadia commercial

The Incredibile in Sky Broadband commercial 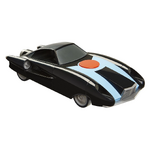 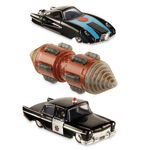 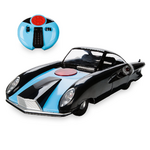