Incredicoaster is an Incredibles-themed roller coaster located in the Pixar Pier section of Disney California Adventure. It is one of the park's newest rides, and is the only roller coaster at the Disneyland Resort to feature an inversion. Its top speed of 55 miles per hour (89 km/h) makes it the fastest ride at the Disneyland Resort and one of the fastest rides at any Disney theme park. It replaced California Screamin', which closed on January 8, 2018, as part of the new Pixar Pier[1] and in conjunction with the release of the film, Incredibles 2.

The Incredicoaster is set after the events of Incredibles 2. To honor the superhero family's work in protecting the city, the citizens of Municiberg have renamed and rededicated the roller coaster at their local amusement park after the Incredibles. A queue pre-show video features interviews with the family and Edna Mode as they attend the opening, where Bob and Helen are enthusiastic about the event while Violet cynically points out that renaming an old ride isn't worth getting that excited about. However, with Jack-Jack and Edna being too short to ride, they end up waiting for the family in the VIP lounge near the loading station, which has been reconstructed into a Mid-Century Modern structure.

As the ride begins, Jack-Jack escapes, prompting a chase around the rollercoaster to retrieve him. The launch sequence at the start of the ride is called out by Dash Parr, who can be seen narrowly avoiding Jack-Jack's lasers inside the first tunnel. The next tunnel features Elastigirl stretching out to catch Jack-Jack, though his gooey form makes it hard to get a good grip of him. As guests drop out of the tunnel, Mr. Incredible tries luring Jack-Jack with a cookie and the coaster train proceeds to the loop. When Jack-Jack's fire abilities pop up in the next tunnel, Violet Parr uses her forcefields to try and extinguish them while protecting the coaster passengers. Jack-Jack then begins to multiply and numerous babies can be seen floating around the track. Finally, Jack-Jack returns to Edna, having trashed most of the lounge when going into his giant form, ending the ride.

Incredicoaster at night with Pixar Pal-A-Round 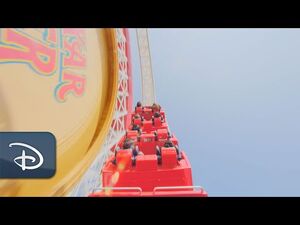