Chief of the Indians

"How!"
The Indian Chief (named Great Big Little Panther in the original novella) is Tiger Lily's father and the leader of Neverland's indigenous tribe in Disney's 1953 film, Peter Pan.

One look at the Chief and one is bound to be intimidated. This can be because the Chief is in a bad mood, or if his daughter is in danger, but deep down he is extremely kind and rather sweet. He often looks stern and has never been seen smiling (aside from a brief moment in which he delivered an oration in sign language).

In the movie, when John, Michael, and the Lost Boys are out hunting Natives, they are captured by them instead and taken to the Native Camp and brought to the attention of the Chief, who thinks they've kidnapped his daughter Tiger Lily (who was actually kidnapped by Captain Hook) and he orders that the Boys will be burned at the stake if Tiger Lily doesn't return home by sunset. Luckily, Peter Pan rescues Tiger Lily and the Chief sets the Boys free and makes them Honorary-Natives too and Peter the chief Little Flying Eagle. He also explained through the song What Made the Red Man Red? how the Red Man becomes red by falling in love with a maiden, to which Peter falls in love with Tiger Lily causing Wendy to become jealous and upset.

The Indian Chief with the Indians in Peter Pan's Flight 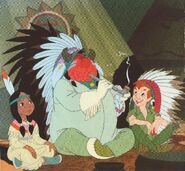 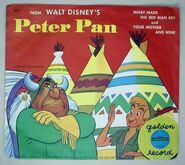