46
Indiana Jones Adventure: Temple of the Crystal Skull is a dark ride in Tokyo DisneySea in Urayasu, Chiba, Japan. It opened September 4, 2001 (together with the park). It is based on the Indiana Jones series.

In the ride, guests accompany archeologist Dr. Indiana Jones on a turbulent, high-speed adventure through a dangerous lost temple aboard military transport vehicles.

Guests ride board an EMV (Enhanced Motion Vehicle) and embark on a voyage into the Temple of the Crystal Skull. They go to the Chamber of Destiny and go through some doors. They proceed into the Hall of Promise, where there are elements from all of the paths in Indiana Jones Adventure: Temple of the Crystal Skull: they have statues holding gold, a dazzling star field overhead, and pictures of people drinking from the Fountain of Youth.

Here, the crystal skull shoots out plasma beams from its eyes and sends the passengers to the Tunnel of Torment, which leads to the Gates of Doom. There, Indiana Jones is holding the gates shut, as the military transport appears to float, as lightning crackles around the walls of the chamber.

The transport then swerves left to look onto the Main Show Building, where a giant stone skull blasts them, but misses. They then head to the Mummy Chamber, where mummies pop out at the guests. They then proceed to the Bug Room, where projectors project bugs on the wall, and puffs of air our sent onto the rider, simulating bugs landing on them. Guests then across a rope bridge, where the skull shoots at them again. They head into the Snake Temple, where a giant Mesoamerican deity named Quetzaloatl attacks the riders.

They start to head across the bridge again, but instead swerve to the left and into the skull, where the crystal skull looks menacingly on them. They go into a room with a large stone face, which blows a puff of presumably poison air at them. They then go into the Dart Corridor, where carved heads inside mouths start blowing darts at the guests. Finally, they meet up with Indy at the Boulder Room, where a rolling boulder comes at them with strobe lights to make it appear that it is going to crush them, so they back up and go under the boulder as a picture of them is taken. They see Indy next to the crashed boulder, issuing one of his prerecorded phrases.

Facade of the attraction 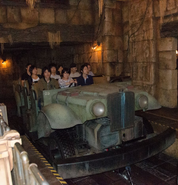