Disney Wiki
Register
Don't have an account?
Sign In
Advertisement
in: Video games, Article stubs, Inside Out,
and 3 more

Inside Out: Thought Bubbles

Inside Out: Thought Bubbles

Puzzle
Inside Out: Thought Bubbles is a mobile game based on the Pixar/Disney film, Inside Out, and Bubble Witch Saga. Created by the same people who brought Frozen Free Fall and Where's My Water?. The game first came out on March 11, 2015 and was later released worldwide in Summer 2015.

Growing up can be a bumpy road, and it’s no exception for Riley. Like all of us, Riley is guided by her emotions — Joy, Fear, Anger, Disgust and Sadness. The emotions live in Headquarters, the control center inside Riley’s mind, where they help advise her through everyday life. Join Riley's emotions on a journey to match and sort memory bubbles, as you travel through unique locations inspired by the film. Play this bubble shooter that twists the puzzle genre inside out! Whenever wasting memories, there is a failure for losing a life and there is a wheel to spin.

Listen to the little voices inside YOUR head – 'Inside Out Thought Bubbles is the game to play!'

The game is a basic shooting game, where you have to launch colored memory balls and line them up with three or more to make them disappear. The game has four different modes:

Wheel After the Failure

Joy's sunburst turns all memories in an area yellow and disappear.

Sadness' raincloud causes all memories above it to turn blue and disappear.

Anger's fire makes a limited number of memories blow up in a row.

Disgust's wave causes all memories of the same color to disappear when you hit them.

Fear's ball bounces off other memories rapidly, making any memory it hits disappear. 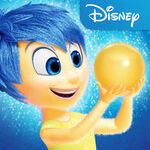 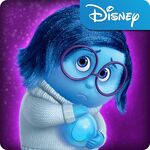 When you fail a level with Sadness 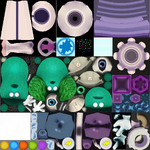 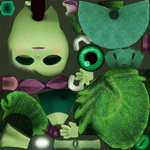