"Inside Outer Space" is an episode of Walt Disney's Wonderful World of Color. It aired on February 10, 1963.

Ludwig Von Drake gives a lecture on outer space, using footage from Man and the Moon, Man in Space and Mars and Beyond.

"Venus is a planet of passion. People do not cook because they live on air, music, and love."

"The natives of Jupiter is pretty. They do not lie or steal, but is terrified of their giant Jupiter-type horses." 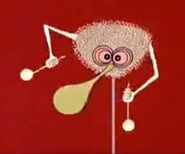 What H.G. Wells theorize Martians would look like. This creature would later appear in the title sequence for Wander Over Yonder.

Donald Duck's cameo as one of the "Mars men"

"There is absolutely no life on the planet Mars."
Add a photo to this gallery

Retrieved from "https://disney.fandom.com/wiki/Inside_Outer_Space?oldid=3858670"
Community content is available under CC-BY-SA unless otherwise noted.