“...Wi-Fi is the internet, which is an online community where human beings go to shop, play games and socialize.”
―Sonic the Hedgehog about the Internet

The Internet is the physical digital world within the real-life internet that Wreck-It Ralph and Vanellope von Schweetz travel to in the 2018 film Ralph Breaks the Internet.

The Internet is a massive digital metropolis, functioning much like New York City, Los Angeles, or London. Each building and stand in the digital city-like world is a website. They are divided into various districts that share a common element such as social media, shopping and financial.[3] Because the Internet is virtual, the buildings' interiors are not limited to their exterior's size: every building contains its own virtual world.[4] Like the real-life web, the Internet is always growing, so some buildings are under construction to represent new websites.[4]

The populace of the Internet is divided into two groups: the "netizens" and the "net users".[2][3] The netizens are the permanent residents of the Internet and analog to the video game characters of Game Central Station — digital personifications of the Internet's functions, websites, and apps, powering their respective expanse, including the setting and the avatar characters of the online games, like Slaughter Race. The block-headed net users are avatars of the real-life people using the Internet daily, serving as the consumer populace of the metropolis.[3] The netizens fulfill the actions that net users must perform when surfing the internet.[2]

Some of these websites' Internet representations are puns and pastiches of themselves; for instance, the Twitter hub is three trees that is home to "Twitter" birds that "chirp" out tweets, while eBay is an auctioning convention and Oh My Disney resembles a D23 expo. As for the Dark Net, it resembles a dark alleyway.

The "globe" of the Internet

Oh My Disney icon on the globe 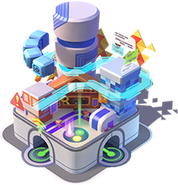