The Avengers: Earth's Mightiest Heroes
Hulk and the Agents of S.M.A.S.H.

Invisibility
Invisible forcefield projection
Invisible Woman is a Marvel Comics character who is a member of the Fantastic 4 from both Disney XD's The Avengers: Earth's Mightiest Heroes and Hulk and the Agents of S.M.A.S.H..

Susan has a slender body, blonde hair, fair skin, and blue eyes. She wears the uniform that Reed created using unstable molecules. The uniform is blue in color and has the black and white "4" symbol on the chest and collar. She also wears black gloves, boots, and a belt.

Not much about Susan's past has been shown thus far, except that she got trapped in the Baxter Building when it was sent to space by the dastardly Dr. Doom. At some unknown point, Sue was replaced by a Skrull imposter. She was constantly sedated by her Skrull captors to stop her from using her powers. When Captain America assembled the other prisoners to get their freedom and return to Earth, refused to leave the weakened Sue despite Viper telling she would be a load.

She somehow saved her teammates and the whole Baxter Building from her doppelganger. Some time later, she was part of the Avengers' expanded team against Galactus.

Sue Storm was captured along the other Fantastic Four members by The Collector. Later on she along with the rest of the Fantastic Four teamed up with the Agents of S.M.A.S.H. to stop the Tribbitites invasion.

Background in other media 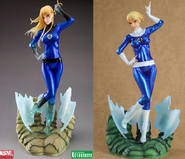 PNG
Add a photo to this gallery

Retrieved from "https://disney.fandom.com/wiki/Invisible_Woman?oldid=4393143"
Community content is available under CC-BY-SA unless otherwise noted.