Quinn Wilson
Irene Bedard is an American actress, who is best known for her portrayal of Native American characters in a variety of films.

Her first role was as Mary Crow Dog in the television production Lakota Woman: Siege at Wounded Knee, which depicted the 1970s standoff between police and Native Americans at Wounded Knee, South Dakota. She attended The University of the Arts in Philadelphia, Pennsylvania, where she studied musical theatre. In 2005, she was cast in the television miniseries Into the West, portraying the half-Lakota, half-white adult Margaret "Light Shines" Wheeler.

For Disney, she provided the speaking voice of the titular character in the 1995 Disney animated feature film, Pocahontas and its 1998 direct-to-video sequel, and even reprised her role in Ralph Breaks the Internet. Bedard was also the physical model for the character. She appeared in a different take of the story in the 2005 film, The New World as Pocahontas' mother. She also played Nakooma in Squanto: A Warrior's Tale, and voiced Carol in the Pepper Ann episode "Dances with Ignorance" and Forest Ranger Hero in Higglytown Heroes.

Additionally, Bedard is known for bringing a powerful emotional presence to her characters. She was chosen as one of People magazine 50 Most Beautiful People for 1995. 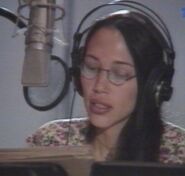 Irene Bedard behind the scenes of Pocahontas.

Irene Bedard along with other Disney Princess voice actresses, and Sarah Silverman, at the 2017 D23 Expo.

(From L to R): Linda Larkin, Jennifer Hale, Paige O'Hara, Auli'i Cravalho, and Irene Bedard at the El Capitan Theatre at the Ralph Breaks the Internet premiere in November 2018.
Community content is available under CC-BY-SA unless otherwise noted.
Advertisement