He appears for the first time in 2008, in the saga of Ultraheroes. Does not really matter, because there are a lot more famous characters like Mickey Mouse and Phantom Duck. Another "small" alter-ego is called Ciccio fork, a wrestler in the Mickey Mouse number 2711.

When Eega Beeva recruited superheroes to find the Ultrapods before Emil Eagle and his Bad-7, there also were two civilians given new superhero identities for this mission. One of them was Gus who got the Iron Gus armor (the other was Gladstone).

In the episode in which he appears, Iron Gus fights against Roller Dollar, besting him, because during the struggle he had fallen asleep just above the 'Ultra-pod. Roller Dollar still manages to get the Ultrapod later (read below).

Iron Gus' appetite was a frequent source of trouble, as when he found and ate all of Super Goof's Super Peanuts, which caused Super Goof to be temporarily unavailable for some missions, or when Roller Dollar had a lawyer robot close an icecream shop, so Iron Gus got distracted "saving" the ice creams from being dumped while Roller Dollar retrieved an Ultrapod. 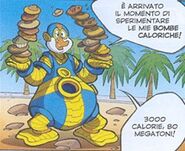 Add a photo to this gallery
Retrieved from "https://disney.fandom.com/wiki/Iron_Gus?oldid=3857564"
Community content is available under CC-BY-SA unless otherwise noted.