Disney Wiki
Register
Don't have an account?
Sign In
Advertisement
in: Characters, The Lion King characters, Meerkats,
and 5 more

Being safe, being far from hyenas

Hyenas attacking the colony, being in danger

Meerkat Colony (descendants)
Iron Joe is a male meerkat in The Lion King 1½.

Iron Joe has light tan, ruffled, and unkempt fur, and dark brown stripes. A section of his tail fur has also been bitten off, presumably by a hyena.

Based on his brief appearance, Iron Joe is very paranoid as he is seen shivering and screaming while standing rigidly upright on a rock, protecting the meerkat colony.

He is seen when Ma directs the audience's attention toward him when convincing her son, Timon, to go on sentry guard for his colony. As the current guard on sentry duty for Timon's Meerkat Colony, Iron Joe gets carried off shortly afterward and is replaced by Timon. After that, he is never mentioned again, although it is likely he, along with the rest of the meerkat colony, were taken to the jungle Timon took his family to. 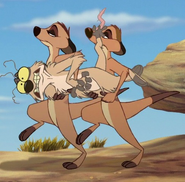