AIA Group Limited
Iron Man Experience is a 3-D motion simulator attraction in Tomorrowland at Hong Kong Disneyland, which opened on January 11, 2017. The attraction is based on the Marvel Comics character Iron Man, becoming the first Disney attraction to be based on a Marvel property.[2] Set at the fictional Stark Expo, the attraction features Tony Stark recruiting guests to fend off Hydra Forces that are attacking Hong Kong.[3]

Iron Man Experience is located in Tomorrowland, and is planned to be reincorporated into Stark Expo.

Discussions of creating Marvel attractions at Walt Disney Parks and Resorts' theme parks began in 2009, with The Walt Disney Company's acquisition of Marvel Entertainment. In his 2013-2014 budget speech, Hong Kong's financial secretary John Tsang announced that a new nighttime parade as well as a themed area featuring characters from the Marvel Universe would be built in Hong Kong Disneyland.[4][5] On October 8, 2013, Walt Disney Parks and Resorts chairman Thomas O. Staggs announced that Hong Kong Disneyland would be adding the Iron Man Experience.[2] Walt Disney Imagineering designed the attraction and Industrial Light & Magic created the computer-generated visual effects.[6] Due to the construction of Iron Man Experience, Hong Kong Disneyland Railroad was suspended from February 17, 2014, until June 29, 2015, and the Fastpass service of Buzz Lightyear Astro Blasters was suspended until late 2016. Testing for the ride began in May 2016.[7]

On August 28, 2019, the attraction has updated the view of the park, such as Castle of Magical Dreams and Arendelle: World of Frozen.

The attraction is estimated to have a cost of $100 million and employs a newer generation model of the Advanced Technology Leisure Application Simulator, currently used in Star Tours: The Adventures Continue.[3] The attraction is located at the park's Tomorrowland section, in an area named "Stark Expo", adjacent to Ant-Man and The Wasp: Nano Battle!.[8] Set a few years after the 2010 New York Stark Expo,[9] Tony invites the visitors aboard the Iron Wing Mark VIII for a tour of Hong Kong, including the newly constructed Stark Tower.[10][11] However, HYDRA launches an attack on the city that lead by Arnim Zola, forcing Tony to don the Iron Man armor and fight the menace alongside the Iron Wing.[11]

Arriving visitors enter the Stark Expo, where they can learn the history of Howard Stark, the founder of Stark Industries, before meeting current president Tony Stark, who is introducing a new invention known as the "Iron Wing". [11] At the expo, guests can experience the history of Stark Industries through inventions by Howard Stark, and into the present day, where Tony Stark is inspiring his team of scientists and engineers to make our lives better, more convenient, and safer through technology. At the back of the area, guests can enter the simulator attraction.

On November 22, 2016, Disney Parks announced a multi-year expansion to the Hong Kong Disneyland Resort. This expansion will include an expansion to Tomorrowland which will include new attractions, meet-and-greets, shops, entertainment, and dining locations. The Stark Expo area is the first phase of this expansion. Three years later, Ant-Man and The Wasp: Nano Battle!, a re-imagined version of Buzz Lightyear Astro Blasters, opened in March 2019. In 2023, an Avengers attraction is scheduled to open. It will be on the land that was Autopia.

A concept image released at the attraction's announcement in October 2013 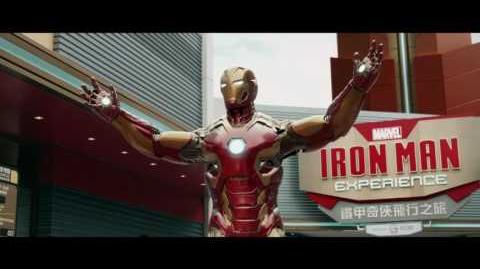