Ironheart is an upcoming American streaming television series, for Disney+. It is an adaptation of the Marvel Comics of the same name, and set within the Marvel Cinematic Universe, centering on the eponymous character, Riri Williams/Ironheart.

The series stars Dominique Thorne in the titular role. Like the other Marvel series, produced by Disney+, it will be tied into wider universe.

The series stars Dominique Thorne as Riri Williams, a genius inventor who creates the most advanced suit of armor since Iron Man.[1]

On December 10, 2020, Kevin Feige officially announced the series at the Disney Investors Day.[7]

On April 27, 2021, Variety reported that Chinaka Hodge had been hired as the showrunner, head writer and executive producer of the series.[8]

During an interview with Comic Book, Dominique Thorne revealed that Riri Williams was set to debut in Black Panther: Wakanda Forever, before her series.[9]

On Disney+ Day, held on November 12, 2021, a new logo was unveiled for the series, along with a short synopsis.

On April 11, 2022, Deadline reported that the studio has set Sam Bailey and Angela Barnes to direct the series.[11]

Kevin Feige announced Dominique Thorne would be portraying the titular character, during a Disney investor's presentation, in which he laid out Marvel's upcoming streaming and theatrical plans.[7] In an issue to Empire Dominique Thorne revealed she was approached for role as the titular protagonist, without the need for any type of audition.[12]

On February 9, 2022, Deadline reported that Anthony Ramos joined the cast in an undisclosed role.[2]

On April 6, 2022, The Wrap reporter that newcomer Harper Anthony joined the cast in an undisclosed role.[4]

On June 15, 2022, Deadline reported that Manny Montana had joined the cast in an undisclosed role.[6] 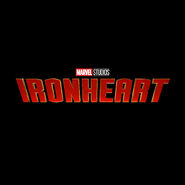