Disney Wiki
Register
Don't have an account?
Sign In
Advertisement
in: Characters, Phineas and Ferb characters, Males,
and 14 more

Phineas & Ferb and their plans

Anyone who doesn't believe him, the color lavender

He always carries a scrapbook that he filled with images and souvenirs from Phineas and Ferb's Big Ideas with him (such as the roller coaster, the chariot race, and the boys with some sort of soup, most likely from the time they created Chez Platypus). He has pictures and stories of the gang ever since day one. He even has a lock of Ferb's hair. He apparently was with them the whole day but had gone unnoticed because his horoscope says he's "the background type". He says he often has to digitally insert himself in pictures of their adventures to make it seem as though he was there as well. He is under the impression that Phineas and Ferb always have a plan but are disappointed to find out that they have just been improvising the whole time ("Hide and Seek").

When they discover Atlantis, he mentions having gotten in the car when Linda stopped for gas, indicating that he wasn't invited onto the beach trip but blended in with the group. Buford and Baljeet do not seem to particularly like him, calling him a nerd among other things ("Atlantis").

Irving also helps "Tri-State Area Unification Day" parade ("Hip Hip Parade"). When Candace teams up with Albert, he removes the cameras that Albert and Candace put up and tries to convince Albert to stop helping Candace ("The Doof Side of the Moon").

During the Sci-Fi and Fantasy Convention, he is involved in a battle between fans of Space Adventure (Speckies) and fans of Stumbleberry Finkbat (Finkies). He and Albert get in a fight because of their different tastes in the genre. However, they are soon reunited when being forced to fight a strange monster, which is computer-generated, unbeknownst to them. ("Nerds of a Feather")

When Phineas and Ferb built a fun house, Irving was hit with Dr. Doofenshmirtz's "Least-Likely-inator". He then began saying that Phineas and Ferb were lame and started flirting with Isabella. This means he has little to no romantic interest in Isabella since he was doing the least likely thing he could do ("Misperceived Monotreme"). For Christmas, Irving receives Phineas and Ferb's trademark clothes and cuddles them dearly. ("Phineas and Ferb Christmas Vacation!") He later has an iPad-like device called Ultimate Phineas and Ferb Digital Scrapbook or "UPAFDS" for short, onto which he has downloaded everything from his original scrapbook. ("What A Croc!") This foreshadows the fact that he might have a crush on Candace, like his brother Albert.

Irving displays a characteristic obsession in Phineas and Ferb along with what they do. At the times he has the opportunity to participate in what they're doing, he's always excited to do so. However, he is often unnoticed because he is a "background type" person, as said by his horoscope. Like his brother, Albert, he openly flirts with anyone he might be interested in, including Candace and Stacy, even though he is not very good at it. ("Moon Farm").

Irving has many hobbies and he is extremist. He goes from being happy and elated to depressed and pessimistic when things get worse to return to its natural state of euphoria when you realize that there is a glimmer of hope.

Irving stands at around the same height as Phineas, but he is slightly chubbier than the rest of the kids. He has buzz-cut orange hair and dark blue eyes. He wears a pair of large glasses with a thick magenta frame. He wears a dark blue shirt with a white collar along with a pair of grey shorts. On his feet is a pair of sneakers which he wears above a pair of rolled-down black socks.

As his older brother, Albert is often shown harassing or sometimes just being mean to Irving, doing things such as confiscating his collection of spy cameras or making him carry his Stumbleberry Finkbat action figures. They'd often dispute over their film genre preferences and rarely agree with each other, however, he and Albert "fought" against the monster that Phineas and Ferb had created together. ("Nerds of a Feather").

As mentioned above, Irving is Phineas's self-proclaimed biggest fan. He devotes most of his life to stalking and spying on Phineas along with his stepbrother Ferb. Although Phineas would often have him assist them in one of their Big Ideas, he doesn't appear comfortable with calling Irving a friend. However, as the series progresses, Irving is involved in more and more of Phineas and Ferb's Big Ideas. He also appears to be more of a friend, and less of a stalker to the gang.

Their direct relationship is unknown, but Irving appears as obsessed in him as he is in Phineas. He has somehow obtained a sample of Ferb's hair, as he has mentioned having one in his scrapbook. He has also advocated to consider putting a picture of Ferb in his wallet. ("Hide and Seek", "Atlantis")

Irving is aware she is trying to get Phineas and Ferb in trouble and doesn’t support it ("The Doof Side of the Moon"). However he, like Albert, has shown interest in her and attempted to flirt with her, although she does not seem to be interested in either of them. ("Moon Farm"). Later, in the episode "What A Croc!", Irving told Candace that he had a big admiration for her and, even helps her to bust Phineas and Ferb (maybe inconsistently). In Happy New Year!, He also helped Candace to record the evidences and in Just Desserts, He helped her to record the Fireside Girls audiobook.

Irving could possibly know about Isabella's crush on Phineas, and it's likely he does not have a crush on her, as the only time he flirts with Isabella is when hit with the "Least-Likely-inator", which makes you do the least likely thing you would ever do. ("Misperceived Monotreme")

In "Moon Farm" it has been hinted that Irving may have a crush on her, as he flirted with her and Candace. Other than that, they have not had much interaction.

They only interacted in "Phineas and Ferb Musical Cliptastic Countdown", Monogram considers him "not his partner in crime".

Irving had a cameo role in the film, as his only line is "Wolverines!" after the Norm Bots were destroyed with Baljeet in the suit from "The Beak". He does not appear in any of the games on the movie. 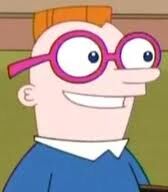 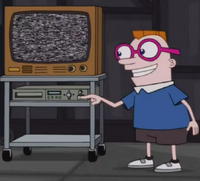 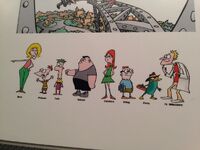