2011-present
Isaak Presley is an American singer, songwriter, and actor. He is best known for his recurring role of Bobby Popko on the Netflix series Fuller House, a spinoff of the ABC series Full House and for portaying Wilbur on The New Normal.

For Disney, he played Ethan Diaz on Disney Channel's Stuck in the Middle.

Isaak Presley during a Disney Channel Wand ID in February 2016. 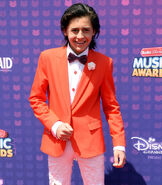 Retrieved from "https://disney.fandom.com/wiki/Isaak_Presley?oldid=3945556"
Community content is available under CC-BY-SA unless otherwise noted.