Race to Save the Magic

Disney, Philby, being a DHI

Mrs. Angelo (Mother)
Isabella "Willa" Angelo is a 15-year-old girl from Orlando and a main character of the Kingdom Keepers book series by Ridley Pearson. She is one of the five kids that modeled as DHIs (Disney Host Interactive or Daylight Hologram Imaging) to become holographic guides to the Disney Parks. She the Disney expert of the Keepers. Their goal is to stop the Overtakers from controlling the parks.

Willa likes to play by the rules. Admittedly she is a super smart geek with some pretty nerdy hobbies, like, say, archery. Actually, archery is kind of cool (and possibly useful). She’s also a swimmer and an animal lover. She’s pretty virtuous all around, which is why she doesn’t like to break Disney’s rules – sometimes problematic for a DHI trying to fight the Overtakers. But don’t be fooled – Willa is a pretty daring girl and she will surprise you!

Willa on Disney After Dark 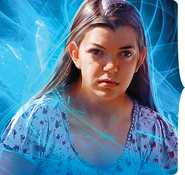