2007-present
Isabella Murad is an American actress and voice actress who is probably best known for her role as Ellie Spicer in Criminal Minds. 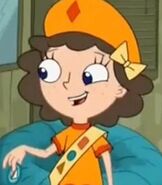 Milly
(Phineas and Ferb)
Add a photo to this gallery

Retrieved from "https://disney.fandom.com/wiki/Isabella_Murad?oldid=4371120"
Community content is available under CC-BY-SA unless otherwise noted.