A Father's Heart
It Was Fate is the title of the 107th issue of the Italian comics series W.I.T.C.H.

Nihila was defeated! But it was far from easy. All girls had to go through one of the dark queen's tests. Each girl faced their own elements in a way they didn't expect. One by one, the girls failed. The only girl who managed to withstand the pressure was the seemingly fragile Hay Lin, whose words about youth and inexperience weighed more than Nihilas old age. Hay Lin's hand may be unwritten, but it's not pointless. All people have their own fate to write and "no one can imprison the sky". 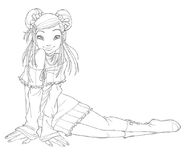 This book article is a stub. You can help Disney Wiki by expanding it.