Before making its television debut, the episode was first released on Disney XD's UK YouTube account on February 15 during the same year.

Professor Granville introduces Hiro to Karmi, who was previously the youngest student to be admitted into San Fransokyo Tech until Hiro came along. As they are both young geniuses attending college, Professor Grandville believes that Hiro could do with some socialization with someone about his age. Karmi is very optimistic about making friends with Hiro, but after Professor Grandville leaves the two to get acquainted her tone suddenly changes to not wanting anything to do with Hiro. She prefers to keep to herself and work on her research. Hanging around Karmi's lab, Hiro learns that she is into biology and has this weird habit of talking to her virus samples as if they were friends. He tries to be friendly, but Karmi remains unfriendly towards him. He learns from Go Go that Karmi has no friends and took pride in being the youngest genius in the school, which has now become Hiro's thing.

During night patrol, Hiro, Baymax, and Go Go come face to face with a mother-daughter criminal duo known as High Voltage. The three heroes engage them as they rob a couple of automated teller machines, but lose the fight when they use their electronic powers and dance moves. Hiro and Go Go tell Wasabi, Honey, and Fred about it the next day at school. Fred sees a comic book similarity as usual, and Go Go sarcastically suggests they should study some comics to figure out how to beat High Voltage. Fred takes her seriously and suggests looking up Captain Fancy: Issue 188, where the hero lost battle after battle to a mother-daughter acrobat team, similar to High Voltage. Hiro meanwhile realizes that Karmi has a crush on his alter ego when he sees her drawing his superhero self in one of her textbooks.

The next night, Big Hero 6 engages High Voltage again. Even with the whole team together, they fail to stop the mother-daughter criminal duo. Karmi gets a good look at Hiro's face when he saves her from a falling lamppost but somehow does not seem to recognize him. Sulking over their defeat the next day at school, Go Go reluctantly decides to go ahead with Fred's idea in looking up Captain Fancy: Issue 188 for a way to defeat High Voltage. Unfortunately, Fred does not have it, and the only copy in existence is in possession of his arch-rival, Richardson Mole. They visit him at his comic book store, and he grants them permission to read it after Go Go wins at one of his Fred themed games. Meanwhile, Hiro starts to question Granville's decision in pairing him with Karmi, when he is already well adjusted in socializing. Karmi, on the other hand, does not appear to have any strong socialization with other people.

Big Hero 6 intercept High Voltage for the third time, who are robbing a bank. Fred and Go Go arrive much later, after reading through Captain Fancy: Issue 188. Go Go believes Fred has found the answer to beat High Voltage, but much to her annoyance, he only found the answer regarding Hiro's identity not being noticed. However, Fred inspires Go Go when he brings up how Richardson cut the power to his house when he almost bought the comic. She has Honey insulate her discs with rubber goo and is given to chemical balls. She uses the rubber on her discs to shield off the duo's electric attacks. Go Go gets close enough to confiscate the energy orb that gives them their powers and insulates it in rubber goo. High Voltage tries to escape, but Honey traps them both in sticky goo, and the team beats High Voltage.

The next day, much to Karmi's shock, Hiro thanks her for helping him socialize instead of ratting about her behavior towards him. He also realizes that Granville set him up with Karmi to help her become more social, she, in turn, gains some respect for Hiro, but still slightly looks down on him. Meanwhile, Obake is watching the pictures of Big Hero 6, then a close-up picture of Hiro and Baymax. His face mysterious glows. 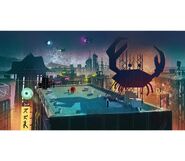 "He can say hey Karmi to me any day."

"You guys should audition for Top Feet."

"Time to power down, ladies."