This article is about the Disney Parks attraction at Disney's Animal Kingdom and Disney California Adventure. For the similarly-named short film, see It's Tough to Be a Bird.

It's Tough to Be a Bug! is a 9-minute long 3D film based on the 1998 Disney·Pixar film, A Bug's Life, using theater lighting, 3-D filming techniques, audio-animatronics and various special effects. Flik the ant, from A Bug's Life, hosts the show and educates the audience on why bugs should be considered friends. It was the first Pixar attraction to open in a Disney park.

At Disney's Animal Kingdom, the Bug's Life theater is located inside The Tree of Life. As the queue winds around the tree, visitors can glimpse animal carvings on the tree that aren't visible from other vantage points. The "underground" pre-show area features posters of various bug acts from the show, as well as those for all-insect parodies of Broadway musicals, such as Beauty and the Bees, Antie, Web Side Story, The Dung and I, Little Shop of Hoppers, and My Fair Ladybug.[7] Each poster has facts about the bug/s featured in that movie.

At Disney California Adventure, the Bug's Life theater was located in A Bug's Land. There, the queue passed through a replica of Ant Island before heading underground, where the queue appeared the same as the one at Disney's Animal Kingdom. It was originally part of the Bountiful Valley Farm pavilion of the park until A Bug's Land was built around it.

About a year before the opening of Animal Kingdom, Disney Imagineers had decided to place a show inside the park's centerpiece Tree of Life, but struggled to find an acceptable concept. One favored concept was focused around Rafiki taking guests on a journey through the natural world and telling the stories of creatures found on the tree's trunk and roots. Disney CEO Michael Eisner suggested a tie-in with the upcoming Pixar film A Bug's Life, and the creative team developed a story based around the characters from the film. Visual effects studio Rhythm and Hues was brought in to produce the 3-D animated portion of the show, while Disney special effects teams created the rest of the experience, including animatronic characters, wind, water, and foul smells.[8][9] The show was originally planned to run twelve minutes, with a deleted act focusing around a Dating Game Show where Flik would interview three bachelorettes from species known for eating their mates: a Black Widow Spider, a Praying Mantis, and a Jumping Spider. This was ultimately scrapped when Eisner disapproved of the idea of interspecies dating.[10]

The lobby music overture consists of insect-themed renditions of "One" from A Chorus Line, "Beauty and the Beast", "Tomorrow" from Annie, "I Feel Pretty" from West Side Story, " Hello Young Lovers" from The King and I, and "Flight of the Bumblebee"/"Tonight" from West Side Story.

The doors close, and the announcer tells the audience (especially the unseen bugs) not to buzz, sting, pollinate, or chirp during the show. Flik the ant welcomes the audience in audio animatronic from from a hole in the ceiling and tells them to put on their bug eyes (3D glasses). The show begins with the butterflies that formed the curtains flying away. The title card, a leaf that has the words "It's tough to be a bug!" eaten through it and held by a pair of silkworm caterpillars (the right one continues to eat the leaf), appears along with an animated Flik, who instructs a blue butterfly to move off the set before explaining to the audience that "it's tough to be a bug". Then, jungle music begins to play as the leaf and silkworms are moved back up, and a Mexican redknee tarantula (referred to as a Chilean Rose Tarantula in the show) named Chili makes his appearance, surprising Flik. A pair of acorn weevils, along with Weevil Kneevil, place a spiderweb slingshot on the stage and launch acorns from it (which triggers hidden air cannons in the back of the seats). Chili shoots the first acorn with a quill, but fails to shoot the second due to Weevil holding on to it. Weevil then taunts Chili, who chases after him off the stage. The next guest is a soldier termite who defends his mound by spraying intruders with acid. A piece of the set (wood) falls with a rumble and the "Termiteator" steps out. The termite shoots at a taunting flea. Sensing more intruders, the termite shoots at the audience (which triggers hidden water sprayers in the back of the seats), despite Flik's protests, until he runs out of acid and leaves, saying that he will be back. Flik (hoping no one in the audience wasn't allergic to acid) next introduces a stink bug named Claire de Room, who walks onto the stage. The acorn weevils place a flower as a target. Weevil re-enters the scene and crashes into the flower, causing it to move towards the audience along with Claire, who then passes gas, affecting and disgusting both Weevil and the audience (which triggers hidden foul smells in the theater).

An explosion is heard as Hopper the grasshopper, in audio animatronic form, furious that Flik has allowed humans into the insect world, appears. He subsequently instructs a stag beetle chases Flik off the stage and four hornets hold up an ad for "Knock 'em Dead" exterminators. The hornets turn over the ad and use it as a makeshift movie screen to show movie clips from old monster movies featuring giant bugs. Hopper thinks that it's time for humans to have a taste of their own medicine, and a giant fly swatter attempts to flatten the audience. When he sees that the audience was unharmed, he declares war on humans as a hand with a can of bug spray appears and sprays. The theatre goes colorful and hornets sting the audience (triggering hidden leg ticklers underneath the seats), and several black widow spiders go up and down, trying to capture and scare the audience. Hopper, now on screen, says that nothing can stop him, but a chameleon appears and tries to eat him. Hopper, afraid of the chameleon, retreats as the reptile follows.

When asked what to do now, Flik tells the others to bring in the next act, but was told that he refuses to come out of his cocoon, so he decides they should "wing it" and cue the finale. He reappears and says that he forgot to mention the reptiles, which segues into the finale. Bees, dung beetles (The Dung Brothers), dragonflies, and other bugs sing about how insects help humans and about how "it's tough to be a bug". Weevil returns, holding a moldy cupcake, and the bugs chase him. The butterflies come back to form the curtains and Flik, back in audio animatronic form, wraps things up, saying that magnifying glasses are for looking at little things, not for burning little things, and after he gets the little blue butterfly to go behind the others, the show ends. The announcer asks the audience to remain seated so the unseen bugs can exit safely first. The bugs start to talk all at once asking to let them through as they exit (which triggers the hidden leg ticklers underneath the seats again). The announcer then tells the audience to gather up their personal belongings and take their "small grubs" by their "grubby little hands" as they exit.

The show's score was composed and conducted by Bruce Broughton.

The theme song "It's Tough to Be a Bug!" was written by George Wilkins with lyrics by Kevin Rafferty, and is available on Music from Disney's California Adventure.

Other characters include Claire De Room and Henry the Bee.

Queue posters for the show's acts 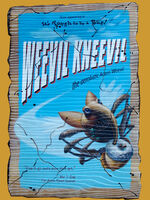 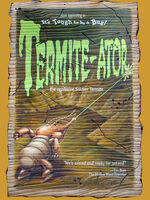 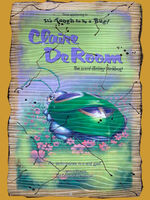 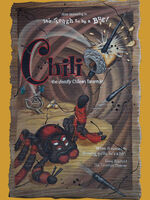 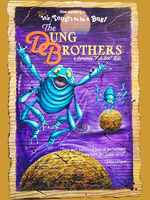