It's Tough to Be a Bug! Stars

It's Tough to Be a Bug! Stars

The stars of the "It's Tough to Be a Bug!" attraction serve as the characters featured throughout the show. Throughout the show, Flik (from the 1998 Disney/Pixar animated feature film, A Bug's Life) presents the bugs throughout the attraction to the audience and gives them facts that they have never knew before (like tarantulas throwing quills at their enemies accurately or soldier termites protecting their mound by using acid on their intruders) in which Flik presents. At the end of the show, a large cast of bugs consisting of bees, dung beetles (The Dung Brothers), dragonflies, and assorted type of bugs where they explain to the audience that it is important for the world to have bugs.

During development of the Disney's Animal Kingdom attraction at the Walt Disney World Resort, the Imagineers were deciding to put a show in the park's icon Tree of Life where Disney CEO, Michael Eisner, was thinking of a tie-in for Pixar's upcoming 1998 animated feature film, A Bug's Life and the team created a story inspired by the characters from the film. Rhythm and Hues, a visual effect studio, provided the animation for the characters throughout the attraction, including animatronics and air, water, and foul smell effects throughout the show. 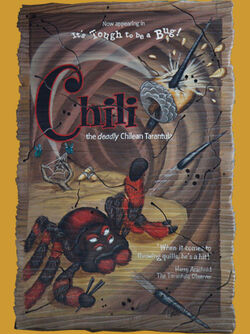 Chili (also spelled as Chile) is a four-eyed Mexican redknee tarantula (identified as a Chilean tarantula throughout the show) who is billed as a deadly tarantula. He is the first character whom Flik encounters throughout the attraction. Being a deadly tarantula, he is very capable of throwing quills at his targets with deadly accuracy, indicating that he never misses a shot in which Chili fires a quill at an acorn launched by acorn weevils (also triggering the air effect). However, when he tries to throw a quill at an acorn with Weevil Kneevil on it, Chili misses the acorn as Weevil constantly dodges all of his quills, causing Chili to miss the target much to Chili feeling furious that he missed his target.

Chili was voiced by Cheech Marin. 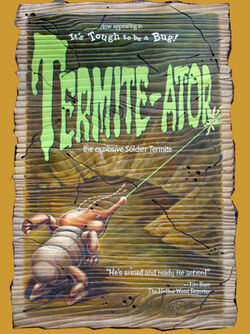 The Termite-ator is a soldier termite who protects his mound by shooting at his intruders using acid. He constantly looks out for intruders to shoot using acid to which upon hearing a flea taunting him, he confuses him for an intruder as he knocks him out with acid. However, upon detecting the audience in the show (confusing them for intruders), Flik warns them that the guests are honorary bugs, telling him not to shoot them. However, the Termite-ator denies as he continues firing acid at the guests (which triggers water effects in the show) to which he suddenly runs out of ammo, just as he leaves the show.

The Termite-ator was voiced by French Stewart. 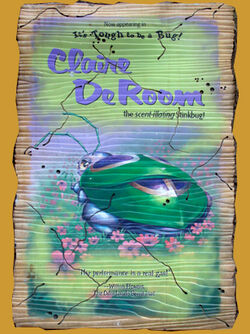 Claire de Room is a stinkbug who is described as the silent, but deadly member of the bug world. Although Claire does not talk throughout the show, she is capable of unleashing a foul smell (which triggers the stench effects throughout the show) which is the ability that stinkbugs do in real life to scare off their enemies. Though Weevil Kneevil almost disrupted Claire's act, Claire's stench ability was able to cause Weevil to faint. After Claire does so, Flik tells her to "lay off the churros" just before she leaves.

Claire does not speak and therefore has no voice actor. 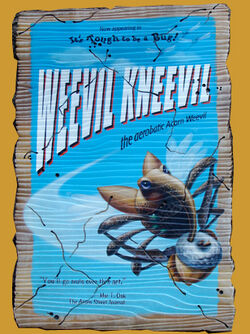 Weevil Kneevil is an aerobatic acorn weevil as his name implies. However, he is depicted as a troublemaker throughout the attraction being an obstacle in recurring occasions. He is mostly seen carrying an object which he uses to protect himself. During Chili's act when an acorn with Weevil Kneevil on it is launched, Chili misses his shot in which Weevil constantly dodges the poisonous quills fired by Chili just as he taunts Chili. During Claire de Room's act, Weevil appears again in the show where he almost disrupts Claire's act by flying through the flower which Claire was about to use her stench ability on him; however, Weevil suddenly faints after being affected by Claire's foul smell. He later appears at the end of the attraction where he holds a mold cupcake.

Weevil was voiced by Jason Alexander. 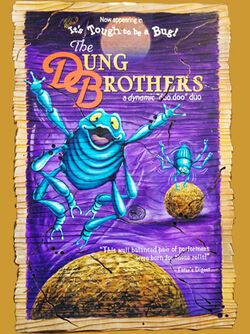 The Dung Brothers were voiced by Tom Kenny.

Role in the attraction

When Flik tells the audience to put on their Bug Eyes 3D glasses so the show can begin, the butterflies forming a curtain fly away while Flik tells a singular one to leave. A caterpillar can be seen chewing on a leaf forming the attraction's title just before the leaf is taken away while a tarantula named Chili enters the show. As Chili looks at Flik, he startles him just as he apologizes for scaring him. Flik then explains to the audience that tarantulas just like Chili can throw poisonous quills at their enemies with deadly accuracy. Chili then throws his quills at an acorn fired via slingshot throughout the show. Chili was able to throw a quill at the acorn, telling the weevils to launching acorns so he can continue his act. However, when an acorn with Weevil Kneevil, an acorn weevil, is launched, Chili attempts to shoot the acorn but misses. Chili continues firing more poisonous quills at Weevil but keeps missing his shot (also triggering the air effect in the attraction). Weevil suddenly taunts Chili and leaves the show, much to Chili feeling enraged that he has been fooled just before leaving the stage. After Chili leaves the stage, the slingshot and acorns props are removed from the stage.

The next guest being presented by Flik is a stinkbug named Claire de Room, as Flik describes her as the silent but deadly member of the bug world. As Claire enters the stage, a staff member of the show (an acorn weevil) tells Flik that the target (a flower) for Claire to interact with is ready. As Flik tells Claire to do her act, Weevil Kneevil suddenly bursts into the flower throughout the show almost disrupting the act while Claire doesn't notice him. Claire suddenly releases a smelly stench which spreads on Weevil which causes him and triggers the foul smell effect inside the theater. After Claire does her act, Flik tells her to "lay off the churros" just as Claire leaves the stage while the acorn weevils remove the flower prop from the stage.

However, Hopper suddenly appears and is furious with Flik for bringing humans into the theater which he believes that humans are a threat to all types of bugs just as Hopper sends in a stag beetle to eject Flik out of the show while four hornets hold a movie poster titled "Knock 'Em Dead! Exterminators" (depicting an image of a cartoon bug being squeezed by a pair of boxing gloves on it) for Hopper to show evidence of humans being a threat to all types of bugs. Hopper tells the audience to watch this movie, which shows footage of the relationship between humans and bugs as enemies. After showing footage of a human hitting a fly with a flyswatter and another footage of a human using bug spray, the screen goes dark as the fog effect is spread inside the theater. As the theater goes dark, hornets (only their stingers are shown on the seats which are triggered, which are actually fake stingers) attack and hamper the guests throughout the show. After the hornets retreat, Hopper commands a group of black widow spiders which descend from the ceiliing in the theater, terrifying the guests. As the spiders continuously go up and down throughout the show, Hopper suddenly tells them to leave just as the spiders follow what Hopper says to them. Hopper appears again on screen and explains that nothing can stop him, but a chameleon suddenly grabs him with its tongue (also triggering the wind effects again) just as Hopper is spat out as the chameleon attempts to eat him in which Hopper retreats in defeat just as the chameleon also leaves.

As Flik returns to the stage for the finale, he explains to the audience that the reptiles which he forgot to mention don't seem to care that "it's tough to be a bug". As the finale begins, Flik presents the finale with a group of bees who perform the attraction's titular song. As Flik and the bees sing together, the bees sing their part while fireflies form a lightning bolt symbol to represent giving thanks to bugs for their marvelous powers. The Dung Brothers, two dung beetles, appear in the show and sing their part while rolling on their dung balls explaining to the fact that without bugs, they would be "out there wallowing in shoulder high waste". After this, dragonflies appear and sing their part followed by a group of assorted bugs who explain to the audience that it is important for the world to have insects that help take care of the environment. After the song, Weevil Kneevil suddenly appears again holding a mold cupcake just as the bugs chase Weevil and attempt to get the cupcake. After the show, the butterflies return and form the curtain just as Flik (in audio-animatronic form) explains to the audience that magnifying glasses are used for looking at little things, not for burning them. Just before the show ends, Flik tells the little butterfly again to be with the other butterflies just as the show ends with the guests exiting the attraction to deposit their Bugs Eyes 3D glasses into the bins located outside the theater.