Joe and Olivia
Jonathan Kimble "J.K." Simmons is an American actor and voice actor. He is best known for his roles as Dr. Emil Skoda in the Law & Order television franchise, Vernon Schillinger on the HBO drama series Oz. He also voiced Tenzin in the Avatar: The Last Airbender spin-off series The Legend of Korra, and Kai, the main antagonist of DreamWorks' Kung Fu Panda 3. Terence Fletcher in Whiplash, which he won an Academy Award for Best Supporting Actor. He is also well-known as the current voice of the Yellow M&M in the M&M's commercials since 1996, and as the voice of Cave Johnson in the video game Portal 2.

For Disney, he voiced Seizaemon in Studio Ghibli's Pom Poko, Martin Smarty in Kim Possible, J.B. in Phineas and Ferb, J. Jonah Jameson in The Avengers: Earth's Mightiest Heroes, Ultimate Spider-Man, Avengers Assemble, Hulk and the Agents of S.M.A.S.H. and Spider-Man: Far From Home, Stanford Pines in Gravity Falls, and Mayor Lionheart in the 2016 Disney animated feature film, Zootopia. He also played Siskel in the 1994 Touchstone Pictures film, The Ref, Buffalo Bill Cody in Hidalgo, Garth Pancake in The Ladykillers, Ray Kendall in The Cider House Rules, a souvenir hacker in Celebrity, and Brian in Extract.

J. Jonah Jameson
(Spider-Man: Far From Home)
Add a photo to this gallery 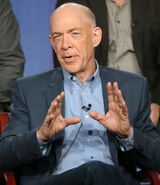 J.K. Simmons speaks at the Growing Up Fisher panel at the 2014 Winter TCA Press Tour.

J.K. Simmons behind the scenes of Zootopia.

Retrieved from "https://disney.fandom.com/wiki/J.K._Simmons?oldid=4039143"
Community content is available under CC-BY-SA unless otherwise noted.