Superheroes, all those who wear masks

John Jonah Jameson is a Marvel Comics character. He is the primary newscaster of a journalistic talk show called the Daily Bugle.

In the Marvel Cinematic Universe, J.K. Simmons portrays J. Jonah Jameson in Spider-Man: Far From Home and Spider-Man: No Way Home, after playing a prior incarnation of the character from Sam Raimi's Spider-Man trilogy. He also appears in The Avengers: Earth's Mightiest Heroes, Ultimate Spider-Man, Avengers Assemble and Hulk and the Agents of S.M.A.S.H..

Jameson is a loud, selfish, and arrogant person. He dislikes masked vigilantes, regardless of good or evil. Because of this, he is quite obnoxious and rude when spreading his beliefs. His opinion towards Spider-Man is not very high, seeing him as nothing more than a "menace" to all of New York City, and is always criticizing him for his actions, even though they are pure good and when he has saved his life various times.

Jameson is also incredibly arrogant, wanting everyone to believe that what he says is right. This again shows his selfishness, as he not only broadcasts incriminating footage of Spider-Man being framed for the drone attack in London, but also exposes his identity as Peter Parker to the world, not caring how this would affect the high schooler's social life.

Jameson is a Caucasian bald man with a moustache and a cranky face. While out in public, he wears a hat and a long coat.

Prior to his death, Mysterio creates a video, which, out of context, appears to indicate Spider-Man acting villainous, while Beck himself is made out as a hero. Jameson, a reporter for the news website, the Daily Bugle declares Spider-Man a murderer, before releasing the rest of the footage, which outs Spider-Man's secret identity as Peter Parker.

Venom: Let There Be Carnage

Jameson appears again in the post-credits scene of Venom: Let There Be Carnage, where both Eddie Brock and Venom are somehow teleported into the Marvel Cinematic Universe, just as Jameson's report on Spider-Man's identity is playing on the television, which gets Venom's attention.

In the film, Jameson's bombshell revelation of Spider-Man's identity is immediately sensationalized, granting Peter Parker and the people closest to him unwanted publicity. Jameson is shown to have two studios: a chroma-keyed set in his apartment and a more professional studio elsewhere.

Jameson and his Bugle crew continue to stalk Parker everywhere he goes to try and further sensationalize him, and their wrathful coverage of the Green Goblin's attack in Queens manages to cripple Peter's self-esteem after he lost his Aunt May in the attack. Later, Peter calls Jameson directly and uses the Bugle to lure Electro, Sandman, Lizard, and the Green Goblin to the Statue of Liberty for a final confrontation, in which Doctor Strange ultimately casts a spell that wipes any memory of Peter from the face of the Earth, which includes Jameson. Despite this, he and the Bugle continue to frame Spider-Man as a vile criminal.

Jameson appears in the debut episode for Spider-Man in the series. Like most incarnations, this version is the chief editor of the Daily Bugle newspaper. After the defeat of the Skrulls, Tony Stark visits Jameson trying to tell him that the "Captain America" that appeared on television was a Skrull in disguise. Jameson suggests to Tony that he should take Betty Brant and Peter Parker to get proof of Captain America's innocence. Jameson later has the Daily Bugle print out a story about Captain America saving people from Spider-Man and the Serpent Society. In this series, J. Jonah Jameson hates all super heroes.

Jameson is seen in every television around the city, reporting the news while always talking crazy about Spider-Man being a "menace", while some other people call the web-head a hero. Jameson never appeared in person but only in screens.

In Parker's dream, Jameson was nice to Spider-Man and saying positive things about him on the huge TV screen while other heroes held him high. When the phone rang, he asked web-head if he's gonna answer that, thus ending Parker's dream.

Jameson appears once again as the head of the Daily Bugle Communications network. He first appears reporting via helicopter on the Avengers fight with each other on the grounds of Avengers Mansion when they were taken over by MODOK's microbots. He later appears commending the actions of the superhero Hyperion. When Hyperion starts fighting the Avengers, Jameson reports on this action stating that Hyperion had the right message, but is the wrong messenger. After the Avengers defeated Hyperion, Jameson later stated that Hyperion was not a superhero.

Jameson appears in the first episode of the series again on DBC, this time belittling the Hulk's recent attack while also reprising his dislike of Spider-Man as well. He is muted and mocked by Rick Jones while he and the Hulk were watching the news in response to his disgraceful attitude towards the Hulk. His rantings were later picked up by a being known as the Collector, who ironically took the rantings of vigilantes seriously when collecting Earth's heroes, especially when Spider-Man and Hulk were not abducted as they did not qualify as heroes due to Jameson's negative review of them. 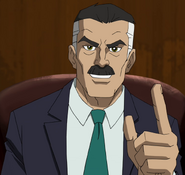 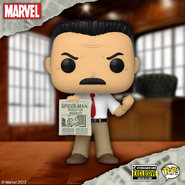