2
James Patrick O'Malley was a British singer and character actor, who appeared in many American films and television programs from the 1940s to 1982. He also appeared on the Broadway stage in Ten Little Indians (1944) and Dial M for Murder. O'Malley was born in Burnley, England.

O'Malley began his entertainment career in 1925 as a recording artist and then as a principal singer with Jack Hylton and his Orchestra in the U.K. from 1930 to 1933. Known at that time as Pat O'Malley, he recorded over 400 popular songs of the day. O'Malley began a solo recording career in 1935 in parallel with his work with Hylton. At the end of 1935, Hylton and O'Malley went to the U.S. to record with a band composed of American musicians, thus emulating Ray Noble and Al Bowlly. The venture was short-lived but O'Malley remained in the United States.

Now known as J. Pat O'Malley, he had a long and varied acting career including the film, Lassie Come Home in 1943 as "Hynes" and later in Walt Disney's Spin and Marty hit television serials as "Perkins" (1955–1957). O'Malley also appeared in the CBS television series Twilight Zone episode called (The Fugitive) (1962). In 1960, he guest starred in the short-lived The Tab Hunter Show on NBC and on ABC's The Law and Mr. Jones with James Whitmore. In 1961, he guest starred in ABC's drama Bus Stop, starring Marilyn Maxwell as the owner of a diner in a fictitious small Colorado town. In the 1962–1963 season, he guest starred twice on Gene Kelly's ABC's Going My Way about a Roman Catholic priest in New York City. He and Spring Byington starred in an episode of Jack Palance's ABC circus drama, The Greatest Show on Earth, which aired in the 1963–1964 season.

In the 1964–1965 season, O'Malley appeared as a handyman in the ABC series Wendy and Me with costars George Burns, Connie Stevens, and Ron Harper. He appeared as Carol Brady's father in the premiere episode of ABC's The Brady Bunch. He made several appearances in the television series Maude, as Hermione Baddeley's beauty, from 1973 to 1975.

Walt Disney also engaged O'Malley to provide voices for animated films such as the Cockney costar in the "Supercalifragilisticexpialidocious" sequence in Mary Poppins in 1964. He also served as Dick Van Dyke's dialect coach for the film, and Van Dyke blamed O'Malley for his often criticized poor Cockney accent. In addition, he voiced the roles of Colonel Hathi and the vulture Buzzie in The Jungle Book in 1967. His voice can also be heard in Alice in Wonderland (1951), in which he performs all character voices in the "Walrus and Carpenter" segment, Cyril Proudbottom and Mr. Winkie in The Adventures of Ichabod and Mr. Toad, and the role of the Colonel and Jasper in One Hundred and One Dalmatians (1961), and in the Pirates of the Caribbean attraction in several roles including the original voice of the Pirate Captain dunking the magistrate into the well.

J. Pat O'Malley died from a heart condition in San Juan Capistrano, California at the age of 80, survived by his wife and two children.

Cyril Proudbottom
(The Adventures of Ichabod and Mr. Toad)

The Walrus and the Carpenter
(Alice in Wonderland)

Jasper
(One Hundred and One Dalmatians)

Colonel
(One Hundred and One Dalmatians) 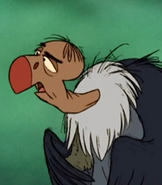