For the 2010 character of the same name, click here.

Deceased
The Jabberwocky is a character that was deleted from the 1951 movie Alice in Wonderland.

The creature originated from the Lewis Carroll nonsense poem of the same name that focused on an unnamed hero slaying a creature called "the Jabberwock". It was also featured in his novel Through the Looking-Glass wherein Alice discovers the book and uses a mirror to read it, only to not be able to understand it any better. She consults Humpty Dumpty to help decipher its strange meaning.

The entire poem reads as follows:

'Twas brillig, and the slithy toves
Did gyre and gimble in the wabe;
All mimsy were the borogoves,
And the mome raths outgrabe.

"Beware the Jabberwock, my son!
The jaws that bite, the claws that catch!
Beware the Jubjub bird, and shun
The frumious Bandersnatch!"

He took his vorpal sword in hand:
Long time the manxome foe he sought—
So rested he by the Tumtum tree,
And stood awhile in thought.

And as in uffish thought he stood,
The Jabberwock, with eyes of flame,
Came whiffling through the tulgey wood,
And burbled as it came!

One, two! One, two! And through and through
The vorpal blade went snicker-snack!
He left it dead, and with its head
He went galumphing back.

"And hast thou slain the Jabberwock?
Come to my arms, my beamish boy!
O frabjous day! Callooh! Callay!"
He chortled in his joy.

'Twas brillig, and the slithy toves
Did gyre and gimble in the wabe;
All mimsy were the borogoves,
And the mome raths outgrabe.

It is known that he would appear in the removed song "Beware the Jabberwock", which was to be sung by Stan Freberg. The scene would take place after Alice left the tea party, and before reaching the palace of the Queen of Hearts. The Jabberwock is based on the dragon-like creature from the poem Jabberwocky, included in the original novel Through the Looking Glass by Lewis Carroll, and is, itself, commonly (though incorrectly) referred to as the Jabberwocky.

One of many sequences removed from the film, concept art for the sequence would end up being used in a Disney-published picture book version of the Jabberwocky poem. The Jabberwock also appears in the educational film Alice in Wonderland: A Lesson in Appreciating Differences. The poem itself would still be referenced in the final film with the Cheshire Cat's song "Twas Brillig" taking its lyrics from the opening stanza of the poem.

There is a book which shows the original text of Lewis Carroll in relation with the storyboard by Mary Blair for this scene. In it, the "Jabberwock" looks like a bird with lots of legs, and is killed by a young prince.

Though the Jabberwocky is absent in the movie, it is in the comic book. However, the creature is extremely different from its deleted movie counterpart. It has three green eyes with pupils that don't glow, massive claws, several checkerboard patterns on its skin, wears no clothing, is of a lighter coloration and, despite having wings, is incapable of flight due to their small size. Also, it is referred to as the "Jabberwock".

The creature is first seen in chapter two, "The Tulgey Wood and The Treacle Well", when the White Rabbit is tricked by the Cheshire Cat into reciting a good portion (the first four stanzas) of the poem on the Jabberwocky. The creature, which is apparently summoned when the poem is recited, appears and begins to chase down the Rabbit, scaring off Mary Ann in the process. The Cheshire Cat calls out to the White Rabbit and genuinely seems to be leading him to safety. Unfortunately, the Cat sends him into the Queen's garden (and, by extension, the Jabberwock).

The creature is next (and finally) seen in chapter three, "You're My Maid Now!", causing a massive ruckus in the Queen's garden. It is chasing the Queen of Hearts, who is chasing the White Rabbit for not only "conspiring" with the "Alice Monster", but also ruining her game of croquet with the Duchess. While this goes on, the Card Soldiers are freaking out, as are the flamingos. The hedgehogs, on the other hand, are sitting around, unsure of who to be afraid of more - the enraged Queen or the hungry Jabberwock. The beast grabs the Queen, intending to eat her. However, it learns first-hand that the Queen is more than capable of defending herself, as the Queen leaves one of its eyes tearing up. As the Queen orders the beast to be beheaded, the Rabbit realizes the creature's weakness - the Vorpal Blade. Unfortunately, the guards lack a blade of that sort, so the Queen improvises with an axe, and, in a rage, saves her husband from being eaten, and beheads the beast, which turns out to be nothing more than a page from an old poetry book that came to life. 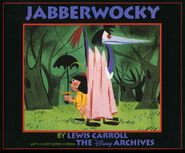