3
Jack Angel was an American voice actor and radio personality. A couple of his most prominent roles include voicing Frenchy in An American Tail: Fievel Goes West and Nikki in Balto.

He has worked on many Disney and/or Pixar television series, movies, and video games, such as voicing the Liquidator and Moloculo Macawber in Darkwing Duck, Quackerbill in DuckTales, Thud in A Bug's Life, Grewnge and Police Robot 2 in Treasure Planet, Head Kidnapper in Trenchcoat, Monster with an Eye and Bob "Dentures" Peterson in Monsters, Inc., Earl "The Terror" Thompson in Monsters University and Mr. Johannsen in Finding Nemo. He also provided additional voices in Quack Pack, Sport Goofy in Soccermania, The Little Mermaid, Lilo & Stitch, Hercules, The Hunchback of Notre Dame, Spirited Away, Porco Rosso, Beauty and the Beast, The Rescuers Down Under, Aladdin, DuckTales the Movie: Treasure of the Lost Lamp, Tarzan, Atlantis: The Lost Empire, and Cars.

He died five days before his 91st birthday. 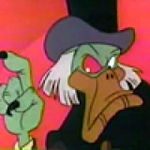