Carleton Wilcox "Jack" Boyd (September 25, 1916 - October 15, 1998) was an American effect animator at Walt Disney Animation Studios from 1940-1983. He also drew the Uncle Remus Sunday newspaper comic page from 1963 to 1972, and, as one of his projects, helped compile the Walt Disney Story film for the parks.

He was born in Glenn, California and died in Santa Barbara, California. 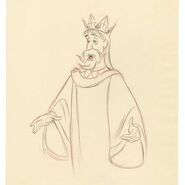