Disney Wiki
Register
Don't have an account?
Sign In
Advertisement
in: Characters, Kickin' It characters, Disney characters,
and 15 more

Jack Brewer is a member of The Sweet Hair Gang, and is often seen as having the hero complex of the group. He is a dedicated skateboarder who learned martial arts from his grandfather - Bobby Wasabi's former teacher and sensei. As a kid, he moved around a lot but is able to adjust quickly, and he is able to make friends very easily. Jerry, Eddie, and Milton invited him to sit with them in school even before he takes out four Black Dragons, who happen to be bullies. He follows the Wasabi Code. Jack is the highest rank in the dojo, with being a 2nd degree black belt. He is also a heartthrob, because it's been shown that many girls fall for him.

Jack is described as a tall, very good looking teenage boy. He has great hair, which is referred to several times on the show. Jack is extremely strong, which allows him to do several things the other members of the dojo cannot. Jack is not only gifted at karate, but he is a 2nd degree black belt and is able to instruct students of the dojo just as well as Rudy. He is also a very talented skateboarder, as seen in Skate Rat. Jack is an extremely nice guy, and goes to great lengths to help out his friends. Jack is cool, yet sensible, and he knows what decisions to make in tough situations. Because of his appearance and personality, many girls are attracted to him.

Jack often has to inspire people to do their best, and often helps the group solve their problems. He is convinced Kim has a crush on him (which she does), and he has a crush on her in return. He was first seen in the dojo when he jumped through the wall to try to not be caught by the mall cops. He has a fear of clowns ever since his fifth birthday. He's loyal to his friends and will go to extreme lengths to protect them. For example, he saved the dojo from getting destroyed with a wrecking ball in dojo day afternoon by stopping the wrecking ball. In the episode Wax on, Wax off, it is shown he's the best at sparring (A badge on his Gi which says "Best Sparring"). During My Left Foot, it is seen that Jack is not very good at football, and can barely even throw the ball. In Eddie Cries Uncle, it is revealed Jack is part of an intramural basketball team. When he was younger, Jack used to be taught Karate by his grandfather, who trained Bobby Wasabi for all his movies, with his cousin Kai (Kickin' It in China), until his family were ashamed of Kai.

As of Spyfall, he is now a sensei at the Bobby Wasabi Dojo. 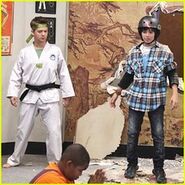