Jack Kelly is the main character of the movie Newsies, and its Broadway adaptation.

Not very much is known about Jack's life growing up, other than that his parents are no longer with him. In the Newsies novel by Johnathan Fast, Jack finds a picture of his parents that they took in Coney Island, Brooklyn. Eventually, he finds the Newsies and becomes one himself. 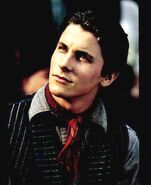 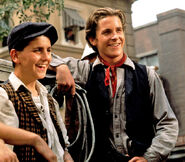 Add a photo to this gallery
Retrieved from "https://disney.fandom.com/wiki/Jack_Kelly?oldid=4245424"
Community content is available under CC-BY-SA unless otherwise noted.