Jacob Kirby was an American comic book artist, writer, and editor regarded by historians and fans as one of the major innovators and most influential creators in the comic book medium, especially when working at Marvel Comics in the 1960s and 1970s as both an artist and as a de facto co-writer with Stan Lee.

In 1979, he was commissioned to draw a comic book adaptation of the Walt Disney motion picture, The Black Hole.

In 2017, he was dubbed a Disney Legend in the field of publishing.

Disney movies and TV shows based on characters he created include: 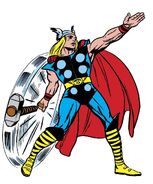