To collect the bounty on Spider-Man

Encased in caramel apple sauce and arrested for his crimes and sent to prison.

"Everyday is Halloween!"
Jack O'Lantern is a Marvel Comics supervillain.

Jack O'Lantern appears in the Ultimate Spider-Man episode "Halloween Night at the Museum" (which was a crossover with Jessie). This version is the result of Morgan le Fay magically placing a jack-o'-lantern on the head of a security guard in her plans to bring about the end of the world, transforming him into a humanoid flaming pumpkin man. Jack O'Lantern attacks Spider-Man, Jessie Prescott, and the Ross Kids in the space exhibit. While Spider-Man handles Jack O'Lantern, Jessie and the Ross Kids hide out during the battle. After Morgan le Fay is defeated, Jack O'Lantern regresses back to the security guard.

Jack O'Lantern appears in the four-part special "Bring on the Bad Guys", where he is one of the bounty hunters who was hired by the Chameleon to hunt down Spider-Man. He battles the web-slinger on the Brooklyn Bridge while Spider-Man was saving a bus of people from falling. Spider-Man follows him into a warehouse Jack concocts his weapons in. While looking for Spider-Man in the warehouse, Jack slips about the bounty placed on Spider-Man though he refuses to directly tell Spider-Man who his benefactor is. Seeing that he won't get more answers from the villain, Spider-Man then kicks Jack into a vat of caramel, encasing him for the police to arrive and arrest him.

Jack O'Lantern's Glider is a Power Disc in the game, The glider is a unique case in that it both a Pack and an air Vehicle at the same time. You can ride on it like a regular air vehicle, but you also wear it on your back as a pack. It shares this trait with Aladdin's Magic Carpet, the Spider-Glider, and the Green Goblin Glider. 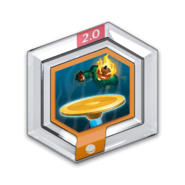 Retrieved from "https://disney.fandom.com/wiki/Jack_O%27Lantern?oldid=4318518"
Community content is available under CC-BY-SA unless otherwise noted.