Disney Wiki
Register
Don't have an account?
Sign In
Advertisement
in: Objects, Magical Objects, Created by Magic,
and 3 more

Directs its owner to whatever he or she desires

“Jack. I've just recalled. I've got this wonderful compass which points to whatever I want. So for what do I need you?"
"Points to the thing you want most. And that is not the Brethren Court, is it?"
"Then what is, Jack?"
"Me. Dead.

Captain Jack Sparrow's compass is the most special of all his possessions. Jack's compass is featured in the 2003 film, Pirates of the Caribbean: The Curse of the Black Pearl and its sequels. Among other appearances, in which the compass hangs from Jack's belt, the compass appears in A Pirate's Adventure: Treasures of the Seven Seas at the Magic Kingdom.

Although it initially appears useless (the needle never points North) Jack's compass has supernatural qualities. The compass cannot be used to navigate in a conventional sense, but it does direct the owner to whatever he or she most desires. Jack acquired the compass from the mystic Tia Dalma, but the magical compass was initially acquired by Jack from Dalma for gave that to his captain Morgan, at that times captain of the Black Pearl (which was called Wicked Wench), however, when his captain died killed by the evil pirate hunter Armando Salazar, Morgan before die gave to Jack his compass and the command of his ship, Jack used his new magical compass to trapped Salazar in Devil's Triangle, and so he became the captain for the Black Pearl and with his magical compass would sails to new adventures, but Jack for having his beloved ship back making a deal with his archenemy Davy Jones, the devil of the seas.

As a young boy, Jack would acquire this magical compass from the mystic Tia Dalma for his captain Morgan, then Jack, who was part of his crew, gave Morgan the compass, who would use it in his adventures on the Winked Wench (the original name of the Black Pearl).

One day, his captain was killed by Salazar, and then he gave Jack the magical compass and the command of the ship, then Jack would use his magical compass in all his glorious adventures.

Ten years prior to the events of the film, Jack Sparrow showed up in Tortuga, where he had the compass and was going after the treasure of Isla de Muerta. Sailing out aboard the Black Pearl, Jack gave up the bearings to his first mate, Hector Barbossa, who led the mutiny aboard the Pearl. Jack's thrown overboard with the compass and is marooned on an island, though escaped later to retake the Black Pearl and kill Barbossa.

After escaping his execution at Port Royal, Jack Sparrow fell off into the ocean and swims towards the Black Pearl. Having the crew pull him from the water, and appointed him captain of the Pearl once again, Jack pulls out his compass while singing "A Pirate's Life for Me". Captain Sparrow closed the compass as he set a new course.

After escaping the Turkish prison, during which time he acquired a drawing of a key, Jack Sparrow tries to use his compass to find a heading, but fails. Meanwhile, Will Turner and Elizabeth Swann were arrested by Lord Cutler Beckett of the East India Trading Company. While Elizabeth is imprisoned, Beckett makes a deal with Will, who agreed to find Jack's compass in exchange for Will and Elizabeth's freedom. Will would find Jack, with the compass on his person, at Cannibal Island. After escaping the island's cannibal natives, Will confronted Jack about his need for the compass. Jack agreed to give Will the compass, but only if he would help find the key.

While visiting the mystic Tia Dalma, she asked Jack Sparrow why he couldn't use the compass to lead him, but then realized that either Jack didn't know what he wanted or he knew "but are loath to claim it as his own." After finding the Flying Dutchman, Will was press-ganged aboard the Flying Dutchman while Jack was sent by Davy Jones to collect 99 souls in three days. As Joshamee Gibbs was recruiting sailor at Tortuga, Jack tried to use the compass but with no success. It wasn't until Jack met with Elizabeth at Tortuga's docks, accompanied by former commodore James Norrington, Jack decided to use her. Jack convinced Elizabeth to use the compass to find the Dead Man's Chest in order to save Will, a plan which was successful as Jack finally found his next heading. However, throughout the voyage, Elizabeth's use of the compass would have it pointing to Jack.

Arriving to Isla Cruces in their search for the chest, Elizabeth had a misunderstanding on which direction the compass's needle pointed at. Both Jack and Elizabeth were soon able to find the exact spot that the chest was buried. However, after a battle ensued, the chest was ultimately taken by Dutchman's crewmen and the heart of Davy Jones ended up in Lord Beckett's possession by Norrington's hand. Meanwhile, the Kraken attacked the Black Pearl, in which the Pearl was dragged to the depths. During the battle, Jack was rowing away to land, but used the compass while deciding if he should return on board or not.

Because Jack Sparrow was taken to Davy Jones' Locker by the Kraken, the compass went along with him. While being rescued by his crew, led by a resurrected Hector Barbossa, Jack tried using the compass to escape on his own, leaving Barbossa, Will, Elizabeth, Pintel, and Ragetti. Unfortunately, the compass only spun in circles, which forced Jack to bring them along aboard the Black Pearl, as Barbossa had navigational charts in his possession.

After escaping the Locker, the Black Pearl was briefly captured in which time Jack Sparrow and Cutler Beckett negotiated aboard the Endeavour. Beckett questioned his use for Jack to find the Brethren Court if Beckett had the compass in his possession. Jack pointed out that the thing Beckett wanted most wasn't the Brethren Court, but to have Jack Sparrow himself dead. Realizing it to be true, Beckett then thought to kill Jack so the compass would lead him to Brethren's meeting in Shipwreck Cove. However, Jack was able to convince Beckett to let him live, so he could lead the Brethren outside. Before negotiations could continue, Jack took the compass and escaped from the Endeavour onto the Pearl.

Later, Jack catches Will leading a trail for Beckett to follow. In response, after a brief talk of Will's conflicting obligations, Jack has Will thrown overboard after giving him his compass. Will was later picked up by the Endeavour, where he made a deal with Beckett and Davy Jones, which allowed them to use the compass to find Shipwreck Cove. During the parley on a sandbar, Beckett returned the compass to Jack, having led his assembled armada for attack.

The compass would remain on Jack's belt throughout the battle between the Black Pearl and the Flying Dutchman, and the destruction of the Endeavour. Jack wore the compass while in Tortuga, upon finding out that Barbossa stole the Pearl once again. Having anticipated Barbossa's treachery, Jack took the map to the Fountain of Youth. Jack pulled out his compass, which pointed to a bottle of rum. As he drank his rum, Jack saw that the compass pointed in the right course and began his search.

Throughout the quest for the Fountain of Youth, Jack Sparrow wore his compass on his belt. Days after being shangheid aboard the Queen Anne's Revenge, Jack Sparrow was forced by Blackbeard to lead the search for the Fountain on the island. Pulling out his compass, Jack sets forth into finding Ponce de León's ship. After happening upon a jungle chasm, Jack told Blackbeard the way to the Fountain before Blackbeard took the compass for himself and forced Sparrow to jump in the chasm so he could retrieve the Chalices.

On the fifth film Jack Sparrow, falling in misery and being with no money arriving to gave his compass for a bottle of Rum inconsapevolly freeing his old enemy the undead ghost Salazar from Devil's Triangle and search revenge on Sparrow. The compass finish in unknown circonstances in the hands of the sea witch Shansa, who gave that to Barbossa. At the end the compass return in possession of Jack Sparrow who is again the captain of the Black Pearl (free by Barbossa with Triton's Sword) and so Jack with his compass, sail to his beloved horizon.

In Kingdom Hearts II, the compass reveals the location of the Port Royal world's Keyhole, allowing Sora, the game's protagonist, to move on to the next world.

The compass hangs on Jack Sparrow's belt in the Pirates of the Caribbean ride.

The compass hangs on Jack Sparrow's belt until Jack himself holds it at the end.

A Pirate's Adventure: Treasures of the Seven Seas

In the game, Jack's compass guides new pirate recruits on a raid throughout Adventureland to collect valuable treasures.

Jack with his compass.

The compass aboard the Black Pearl.

The compass on Jack's person.

Jack finds his heading in Tortuga.

Jack using the compass to begin his search for the Fountain of Youth.

The compass in On Stranger Tides.

The compass in Jack's hand.

The compass reacting to Jack's "betrayal."

The compass freeing Captain Salazar and his undead crew from their prison.

Jack's compass in The Curse of the Black Pearl. 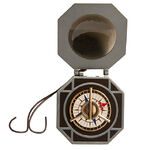 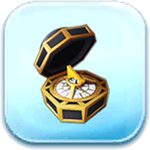