Disney Wiki
Register
Don't have an account?
Sign In
Advertisement
in: Objects, Articles of Clothing, Pirates of the Caribbean objects,
and 3 more

Pirates of the Caribbean
World of Color

“Commodore Norrington, my effects please! And my hat.”
―Jack Sparrow[src]

In the Jack Sparrow prequel novels, one of the things that young Jack Sparrow wanted was to "acquire the perfect hat", as he stated in his Captain's Log onboard the Barnacle. More than likely he had tried on many hats in his life, until Jack acquired his iconic tricorn. According to Pirates of the Caribbean: The Complete Visual Guide:

Any self-respecting pirate captain feels naked without his hat. Jack Sparrow is no exception. The black tricorn is battered and faded, but still serves him well. It's practical as well as decorative: he's filled it with cool fresh water to drink at wells and trapped deadly scorpions in its domed crown.

The hat is seen in the first appearance of Captain Jack Sparrow when he arrives to Port Royal aboard the Jolly Mon. Jack wore his hat throughout his time in Port Royal until he was forced to rescue Elizabeth Swann, who had fallen from the battlements of Fort Charles into the sea, in which he left his hat in the care of Mullroy and Murtogg. While he was facing arrest, Jack took Elizabeth hostage and ordered Commodore Norrington to return his effects, specifically mentioning his hat, before making his escape. However, Jack was ultimately taken to prison, where he still wore the hat in his cell, from which he escaped with the help of Will Turner the next day.

After escaping jail, Jack Sparrow wore his hat throughout the voyage to Isla de Muerta, where he was captured by Hector Barbossa's cursed crew. By the time Jack Sparrow was marooned, Jack's hat was left on board the Black Pearl through the rest of the movie. When Jack escaped execution and returned aboard the Black Pearl, now crewed by pirates sailing under Joshamee Gibbs, Jack is handed his hat and became captain of the Pearl once again.

A year later, Jack wore the hat after his adventure in stealing a drawing of a key. After failing to find a proper heading, Jack put on his hat before looking for rum until meeting up with Bootstrap Bill Turner. Fearing the message Bootstrap Bill gave under Davy Jones, Jack ordered his crew to make for land, by which moment "Jack" the Monkey grabbed Sparrow's hat and threw it overboard. To the surprise of several of his crew, Jack ordered to leave the hat. The hat was later picked up by a Turkish fishing boat, which was summarily targeted and destroyed by Jones' leviathan, the Kraken, in which the tricorne hat was consumed.

Through the rest of the film, Jack Sparrow didn't have his hat, though had tried to find new ones at Tortuga. However, when Davy Jones ordered to attack the Black Pearl, the Kraken ultimately found Jack, where the hat is spat out as the Kraken roared. Picking up his hat, Jack got rid of some of the slime off it, and put it on before facing the Kraken.

In the film, Jack Sparrow wore his hat while trapped in Davy Jones' Locker, and when he reunited with his crew aboard the Black Pearl. Jack did not wear his hat when escaping the Locker or when he met with Lord Cutler Beckett aboard the Endeavour. When the Black Pearl arrived to Shipwreck Cove, Jack did wear his hat but chose not to wear it during the Brethren Court meeting. However, Jack's hat was confiscated when he was taken prisoner aboard the Flying Dutchman, though later retrieved it after escaping the brig.

Jack wore his hat for almost the remainder of the film, from when he fought Davy Jones in the final maelstrom battle and when the Endeavour was destroyed. With the battle won, Jack allowed Joshamee Gibbs to throw his hat before saying, "Now go and get it." In the aftermath of the battle, Jack went into Tortuga, still wearing his hat, where he wooed Scarlett and Giselle before finding out that Hector Barbossa stole the Black Pearl again. Jack still wore his hat as he sailed on a dinghy, beginning his quest to find the Fountain of Youth.

While in London, Jack Sparrow had his hat placed on a horse before putting it on top of his head. Jack wore the hat as he joined Gibbs in a paddy wagon, and when he was forcibly dragged through a palace to meet with King George II. He also wore it in the Captain's Daughter pub, where he talked to his father Captain Teague as well as fighting against an imposter, revealed to be Angelica. After evading the King's guards through a trap door that led to the River Thames, the hat was once again lost and is not seen in the remainder of the film.

In almost all the levels, Jack Sparrow only wore his bandanna in the game. The only time Jack wears his hat is in the "From Frozen to Freedom" level.

Several levels of the game featured Jack wearing his hat and coat. It is also playable in "Free Play" levels.

In the game, Jack wears his hat throughout the game.

In the attraction, Jack Sparrow wears his hat as he hides behind mannequins next to the scenery where a group of pirates are dunking the mayor for information of Jack's whereabouts.

The shot of Jack Sparrow's first scene in Curse of the Black Pearl is played, where Jack's hat is seen.

Jack's hat after being spat out by the Kraken.

Jack before giving Gibbs his hat.

Jack putting on his hat in London. 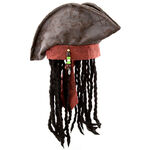