Cinderella
Jack the Giant Killer (also known as The K.O. Kid) is a 1922 Laugh-O-Gram film directed by Walt Disney. The film was based on the British fairy tale.

The film starts in a kind of fair. A giant is being demonstrated by the host "Wildman". There are some lions and tigers in a nearby cage, and a band playing. In fact, this section seems to be a little irrelevant to the rest of the short, and doesn't add much value. Next we see our friend (Jack) who will appear in the later shorts "Puss in Boots" and "Cinderella" (and possibly others as there are still two of the fairy tales I have not seen). He is with the cat, who appears in almost all shorts. The cat is with another white-furred animal who I'm not sure is meant to be a dog or a cat. I'm assuming it's a dog, but sometimes it looks strikingly like a cat. That "dog" may be a prototype of the dog who appears later in "Puss in Boots". Jack and his female friend (Susie) are looking at a poster which is advertising the giant, saying "giant captured in the wilds of WOOF IN POOF". I am not sure about the reference to the location; it may perhaps be a pun on the "whiffenpoof", an imaginary animal mentioned in various works of the early 20th Century. Jack is trying to impress Susie with his ambition to visit the Land of the Giants. She watches as he demonstrates the strength with which he will conquer the giant. Then we see the cat and dog loading up the boat. They all get in and sail away, without Susie in the boat with them. At this point I am guessing that Jack has taken this trip in order to impress Susie. A typically and comically melodramatic scene ensues with the "Twas a dark and stormy night" card. This scene bears a striking resemblance to a scene from the later film "Alice Cans The Cannibals". After the storm calms, the sawblade fish swims up again (the same one from "The Four Musicians of Bremen") and cuts a fish in half before cutting their boat in half. Jack and his animal friends manage to escape onto dry land while the fish blunts his saw on the rock. Clearly they are in the right place as a sign announces "This is the land of WOOF IN POOF; Danger Giants". However it seems that giants are not the only inhabitants as there are a lot of monkeys doing all kinds of tricks. This section of the short is quite entertaining although it bears no relevance to the story. Jack and his friends hide behind some rocks to spy on some giants who are playing golf. Humorously, the giant shouts "FORE!" before he even hits the ball, and everything in sight scampers away. Then Jack arrives at a jail next to a sign saying "Giant Ville; Danger". Randomly, Susie is stuck in the jail and Jack is vowing to save her. The giants turn up and beat up Jack but he seems to be unharmed. In fact, it's the cat and dog who get the idea to set a tripwire for the giants. Jack is too busy being chased all over the place and in and out of various holes in the ground. This section gets a bit tedious. But finally the cat and dog signal to Jack about the tripwire and he leads the giants to trip over it and fall to their doom over the cliff. Conveniently, an exact number of giant sharks appear out of the water to swallow the giants. Then the animals bring in an elephant who helps to rescue Susie and carry everyone off on their way. Susie is finally in love with Jack and they kiss as they ride off on the elephant's tusks. Unfortunately, it turns out this entire story was just a story Jack was telling to Susie, as we return back to the starting scene, with Susie saying "You'll have to do better than that!" This at least helps to explain why Susie was randomly in that jail as it was only a story, otherwise I would be criticising the short for not explaining this part. Still, the fact that it was all a story is a bit of a cop-out and disappointed me somewhat. Perhaps it is a hint to the Arthurian legends on which this story is based. The final piece of the film involves another boy coming and bringing Susie some flowers, and she walks off with him. Frustrated, Jack falls on the floor and knocks himself out, as his animal friends try to revive him. In all, this is a fairly entertaining film, and certainly excited me more than "The Four Musicians of Bremen"; in that sense, it is a pointer to things to come. 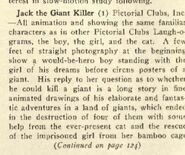 Add a photo to this gallery
Retrieved from "https://disney.fandom.com/wiki/Jack_the_Giant_Killer?oldid=3884674"
Community content is available under CC-BY-SA unless otherwise noted.