Mayan Clan
Jade (pronounced 'Ha-day') is a gargoyle member of the Mayan Clan. He appears in the Disney animated TV series, Gargoyles. His name is derived from the pendant he wears.

In 1996, Cyberbiotics began to encroach on the Mayan Clan's territory, bringing Jade into direct conflict with them. Preston Vogel hired Jackal and Hyena to remove the gargoyles by any means necessary. When the Avalon Travelers arrived, Zafiro enlisted their help in defending their territory.

After the Mayan Clan and their new allies had defeated Jackal and Hyena, Elisa took Jade and Turquesa to Avalon to transplant some rare rainforest plants. 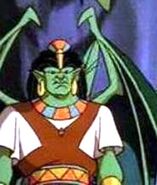 Retrieved from "https://disney.fandom.com/wiki/Jade?oldid=4154253"
Community content is available under CC-BY-SA unless otherwise noted.