The Chronicles of Narnia: The Lion, the Witch and the Wardrobe (video game)

Queen of Narnia
Empress of the Lone Islands

"Is that how you address a queen!?"
"Not know the Queen of Narnia!?"
"I have no interest in prisoners. Kill them all."
Jadis the White Witch is the main antagonist from the 2005 Walt Disney Pictures feature film The Chronicles of Narnia: The Lion, the Witch and the Wardrobe, which is based on the popular children's book series by C.S. Lewis. She was portrayed by British actress Tilda Swinton. Swinton's performance won particular acclaim among fans and critics. BBC film critic Stella Papamichael wrote:

“As the cold-hearted White Witch, Tilda Swinton sets the tempo for this bracing adventure. She is a pristine picture of evil, like the spectre of War that forces the children out of London to the sanctuary of a country manor.”

Jadis is depicted as a depraved, satanic temptress embodying the pain in the world. She takes orders from no one and acts very sociopathic.

Despite this, she can be deceptive when she needs to be, pretending to be kind and gentle towards Edmund Pevensie as part of her ploy to circumvent a prophecy.

In The Lion, the Witch and the Wardrobe, set 1000 years after the events of The Magician's Nephew, Jadis has usurped power over Narnia, having magically forced the land into an "endless winter" during her reign, which as the book opens had lasted for a hundred years. Though it is always winter, she prevents Christmas from ever coming.

During her reign, the White Witch is styled "Her Imperial Majesty Jadis, Queen of Narnia, Chatelaine of Cair Paravel, Empress of the Lone Islands". She makes two claims to buttress her authority to rule over Narnia. The first is that she is a human from Earth (a "daughter of Eve"). At the beginning of Narnia, Aslan gave "sons of Adam and daughters of Eve" dominion over all the beasts and magical creatures of Narnia. (Narnian dwarfs are not considered to be human, even though they can and do reproduce with humans; they are called "Sons of Earth".) Although the White Witch appears human (despite her irregular skin color and abnormal height), Narnian rumor holds that she descends from Adam's first wife, Lilith, and was half-Jinn and half-giantess, and thus not even partially human. The Magician's Nephew, by contrast with this slander, recounts her origin on Charn; but whether the people of Charn are human is never addressed.

The White Witch's second claim is that she is a servant of the Emperor-Over-the-Sea and rules with his blessing. This is at best a half-truth: she is the first to rebel in Narnia, and by the workings of the Deep Magic she is given ownership of all traitors and the right to kill them. For this reason, Mr. Beaver characterizes her as the Emperor's hangman (though Aslan rebukes him for saying this). The White Witch favors the Stone Table for her executions.

When the Pevensie children arrive in Narnia via Digory's magical wardrobe, it is explained to them that, according to an ancient prophecy, when two sons of Adam and two daughters of Eve fill the four thrones at Cair Paravel as Kings and Queens of Narnia, the reign of the White Witch and the endless winter would end. Jadis is aware of the prophecy, and employs spies to tell her of any human that comes to Narnia. While there are other humans in the world of Narnia at the time of the first book — humans descended from the original King Frank and Queen Helen populate Archenland, Calormen, and the island kingdoms — humans are completely unknown in occupied Narnia, to the extent that the Narnians think them mythological.

The White Witch's most notorious deed, aside from uttering the Deplorable Word that destroys Charn, is killing Aslan on the Stone Table (as a surrogate for Edmund), her right by the Deep Magic. Aslan returns to life by Deeper Magic, and in the subsequent battle, Aslan kills the witch, ending her reign of terror.

In Prince Caspian, 1,300 years later, Nikabrik (a dwarf), a hag, and a wer-wolf (to use Lewis's spelling) plan to bring the Witch back using black sorcery in their bid to defeat King Miraz. Caspian X and Trumpkin protest against this, stating "Wasn't she a tyrant ten times worse than Miraz?" Their plan backfires when they are killed in a fight with Caspian and his allies.

Tilda Swinton reprises her role as the White Witch in The Chronicles of Narnia: Prince Caspian. In a scene exclusive to the movie, the trio that planned to resurrect the Witch in the novel manage to conjure up an apparition of her form behind a mythical wall of ice. The Witch says that she needs a drop of blood from a son of Adam to release her entirely, which she tries to take from Caspian and then Peter. However, Edmund shatters the ice before the Witch can be fully released.

During the final battle, the Green Mist assumes the shape of Jadis, who tries to tempt Edmund back to her side.

Jadis is an incredibly powerful sorceress - the most powerful example of Charn's people - and possesses an extraordinary variety of magical powers. She finds the majority of her powers widely useless on certain worlds - except for her supreme beauty and physical strength - but is still able to adapt to her surroundings and develop brand new powers in the process:

The Chronicles of Narnia: The Lion, the Witch and the Wardrobe 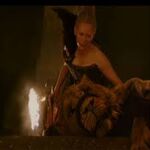 Queen Jadis at one of the Disney theme parks.

An actor playing the White Witch in the short lived Disney MGM Studios attraction “Journey Into Narnia: Creating The Lion, the Witch, and the Wardrobe

The winter sled she and Girnabrik ride when they first meet Edmund in the woods of Narnia, displayed at the end of the Narnia walk-through attraction (was shown on Episode 6 of Prop Culture)

The lion mane headdress costume and polar bear chariot used by Jadis in the final battle of the first Narnia movie, on display at the AFI Villains exhibit near the end of Disney’s MGM Studio Backlot Tour
Add a photo to this gallery

Retrieved from "https://disney.fandom.com/wiki/Jadis_the_White_Witch?oldid=4421484"
Community content is available under CC-BY-SA unless otherwise noted.