This article is about the snake staff owned by Jafar. For other uses, see Staff (disambiguation).

Aladdin
The Return of Jafar
Mickey's Magical Christmas: Snowed in at the House of Mouse
Mickey's House of Villains
Descendants
Aladdin (2019)

Villains Mix and Mingle
Sorcerers of the Magic Kingdom

“Your Highness, Jafar has been controlling you with this!”
―Aladdin to the Sultan after destroying the staff.

Jafar's Snake Staff is a cobra-headed scepter owned by Jafar, in Aladdin. Initially and primarily used as a means of hypnosis, the ruby eyes made those who gazed into them become susceptible to Jafar's suggestions and obey his every order. It was eventually destroyed by Aladdin when he discovered its true function. Once Jafar wishes to become the world's most powerful sorcerer, he gains a new staff that is imbued with various magical abilities.

In the original film, before Jafar becomes a sorcerer, the staff is shown to have the ability to use hypnosis, as shown when Jafar uses the staff to get the Sultan to hand over his mystic blue diamond ring. He claims he needs it to "find the princess a suitor", when he actually needs it to discover the identity of "the diamond in the rough".

In another scene, Jafar attempts to use the staff's power to have the Sultan allow him to marry Jasmine. However, the fanfare caused by the arrival of Prince Ali (Aladdin) distracts the Sultan before he can finish his hypnotized response.

He later brainwashes the Sultan shortly after attempting to have Ali killed, trying to have him state that Jasmine must marry Jafar, and later after Ali reveals himself to have survived and exposes that Jafar had tried to have him killed, to claim that Ali is "obviously lying". However, Ali, deducing how Jafar is able to persuade the Sultan, snatches the staff and smashes it on the floor, exposing Jafar for his villainy as a result.

Later on, Jafar steals Aladdin's lamp, taking over his role as the Genie's master. He uses his second wish to become the most powerful sorcerer in the world. His staff is restored but it now has open fangs and was extremely powerful that uses many skills, including moving people and objects. During the final battle, the staff disappears when Jafar became a giant snake, and then an all-powerful genie.

The Return of Jafar

In the sequel, Jafar is freed from his lamp, and after transforming into his human form, he retains his staff and it is by his side throughout the entire film. Its original purpose is also alluded to by Iago and Aladdin, where the former claimed he had been a victim of the hypnotic properties, and Aladdin also believes it after he is saved by Iago and tries to tell the Sultan this is the case with them not believing him. It had its original look and shot laser bolts from the eyes. He was also shown holding it in his Genie form. It is unknown what happened to the staff after Jafar's death, but it could be assumed that it was destroyed along with or after his lamp.

Hercules and the Arabian Night

In the Aladdin and Hercules crossover, the staff was given its largest role and once again had its original look. In the episode, Hades, Lord of the Underworld, decided to revive Jafar from death after his demise in The Return of Jafar. The staff was used to keep Jafar alive, and if he ever lost it, he would become a lifeless spirit once more. Hades also enhanced the staff to be extremely powerful than before; creating things like live scorpions and shot fireballs. This staff was once confiscated by Hades after Jafar, in hysteria, started causing destruction in the underworld, as a means to force him to cooperate.

However, the creations of the staff can only exist as long as the staff exists, otherwise, the creatures will fade out of existence. Aladdin and Hercules destroyed it during their battle against Jafar and Hades, and with it, Jafar was killed once again and his soul was sucked into the River Styx for good.

In the spinoff show to Once Upon a Time, Jafar's staff was actually a woman named Amara who was trapped in the form of a serpent staff by Jafar. Amara was a powerful healer and sorceress who is feared amongst the residents of Agrabah.

In her earlier life, she was the mother of Cyrus, Taj, and Rafi. When she was badly burned upon some people that Cyrus beaten in a card game, Cyrus had to use the water from the Well of Wonders to heal her. The effects of the water work heal Amara as she learns what had happened. When Nyx arrives, she begs her to spare her sons as they are turned into genies with their lamps being scattered across Agrabah.

A young Jafar visits Amara at her home, begging for her to teach him magically to exact revenge on his father the Sultan for abusing and abandoning him. She insists he is not ready, though he insists that he is, and she reluctantly begins teaching him dark magic. As a man, Jafar is tricked by Amara into giving his friend Akil a poison to make him see how far he will need to go to become the sorcerer he intends to be. The two then begin a sexual relationship and begin a plan to obtain genie magic to become the most powerful sorcerers in the world. Jafar and Amara successfully obtain a genie bottle each, though Jafar learns of a third in Agrabah. He then tricks Amara by siphoning her magic, transforming her into a snake, and converting her into his serpent staff.

Amara was later freed from her staff form due to the hints given to Alice, Will, and Cyrus by the Jabberwocky. Amara confronted Jafar and they both ended up in a brief duel until Cyrus got wounded by a shard of glass. Jafar convinced Amara that they should use the powers of the genies like they planned to do in order to save Cyrus' life.

When it came to Cyrus taking Amara to the Well of Wonders to return the water in her back to Nyx, Jafar attacked them which resulted in Amara dissolving into water upon her death. Following the final battle with Jafar, Cyrus told Taj and Rafi that they were freed from the genie curse at the cost of their mother's life.

While Jafar holds this staff, it means that he's waiting before to continue to looking for the magic bottle of Cyrus. The staff first appears in "The Savior". Jafar uses it to kill Emir, a man seeking help from Aladdin, than Princess Jasmine's Pretendent, Achmed.

A replica of the staff is seen in the hands of a manikin of Jafar in the Auradon Museum.

The staff appears in "Steal Away" as an exhibit in the Museum of Cultural History. When Mal was possessed by her cursed Birthright Jewel, she stole it from the museum and handed it to Zevon. It is seen again when Zevon showed it to Jay, Carlos, Jane, and Freddie in "Options Are Shrinking". When Jay saw it in Zevon's hands, he knew right away that the staff was his Dad's and that it was kept in the museum.

In "Party Crashers" Zevon stole Jay, Carlos, Evie, and Freddie's Birthright Jewels so he could use them to power the staff with their own power. Zevon planned to use the jewel powered staff to turn everyone in Auradon evil. However, in "United We Stand" Mal was able to get ahold of the staff and used it to undo Zevon's "evil"; she also used its power to lift the curse from her jewel. It's possible that the Snake Staff was later returned to the museum.

The Staff hypnotizes the Sultan

Jafar holding his Snake Staff in The Return of Jafar

Genie Jafar with his Snake Staff.

Snake Staff in House of Mouse

Amara, the snake staff's human counterpart in Once Upon a Time in Wonderland

The staff in Sofia the First 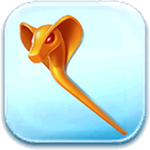