For Disney, he voiced Enrique Rivera in Disney/Pixar's 2017 animated film, Coco. He also voiced Julio in the Disney Channel animated series Elena of Avalor, Panchito Pistoles in Legend of the Three Caballeros, TaleSpin's Don Karnage in the 2017 reboot of DuckTales, Hector in Puppy Dog Pals, Pinguino in The Lion Guard, and Globgor in the final season of Star vs. the Forces of Evil.

Globgor
(Star vs. the Forces of Evil) 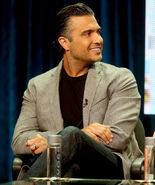 Jaime Camil speaks at the Jane the Virgin panel at the 2014 Summer TCA Tour.

Jaime Camil behind the scenes of Coco.