Jaimie Lauren Tarbush, known professionally as Jaimie Alexander, is an American actress, who is best known for her television role as Jessi in the ABC Family science fiction teen drama series Kyle XY from 2006 to 2009. She also played as Jane "Remi" Doe in NBC crime drama series Blindspot since 2015.

For Disney, Alexander played Sif in the Marvel film, Thor, its 2013 sequel, Thor: The Dark World, Agents of S.H.I.E.L.D. episodes: "Yes Men" and "Who You Really Are", the Loki episode: "The Nexus Event", What If...? and the 2022 film Thor: Love and Thunder. She also played Nikki Atkins in the ABC Studios TV show, Perception. 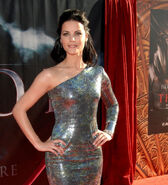 Jaimie Alexander at the premiere of Thor in May 2011.

Jaimie Alexander at the premiere of The Last Stand in London in January 2013.

Jaimie Alexander speaks at the Blindspot panel at the 2015 Summer TCA Tour.