March 1, 2013
"Jake's Birthday Bash!" is the first segment of the forty-sixth episode of Jake and the Never Land Pirates.

Izzy, Cubby, and Skully throw a birthday party for Jake with a very special birthday treasure hunt on Never Land. The first game was held at Tiki Forest. Captain Hook and his crew were invited as guests for the festivities. Everyone with the exception of Hook was enjoying a game of pin the tail on the Tick-Tock Croc. Jake encourages Hook to join the fun. Hook reluctantly plays the game but gives it a try, strays too far from the Tiki Trees and pins the real Crocodile who was sleeping nearby. Hook frantically flees with the enraged reptile in pursuit around the lead Tiki Tree. Jake quickly asks the Tiki Tree to assist the captain, lifting Hook out of the hungry crocodile's sight.

The second game was held at Shipwreck Beach where the pirates enjoy bouncing on the sails of the old shipwrecks as trampling and lastly the pirates venture to Pirate Pinata Platow where Jake tried to break open the pirate pinata. Jake was the first to try to get the treats with his sword but with no luck, next it's Cubby turn but Captain Hook bullies his way past the young pirate to claim the treats for himself with his bat-hook but in the process his bat gets tangled with in the rope holding the pirate pinata flinging it into the Never Sea resulting as the emergency of the episode Izzy quickly uses her pixie dust to rescue the pinata. Hook still insist it was his turn and tries to break the pirate pinata once more he manages to knock the treats out the pinata but before he could enjoy the treats the empty pinata falls on top of him. Allowing Jake, his crew and Sharky and Bones to enjoy the treats. Jake's final surprise was held back on Pirate Island where he is greeted by his Never Land friends. Mr. Smee notice his captain was sulking and ask what was troubling him, Hook confides to his first mate that he always hated birthday parties and he always will due to never had a happy birthday of his own. Just as Jake was set to make a wish with all his friends he declared he likes to celebrate both his and Captain Hook's birthday much to the surprise of his mates, the guests and even Hook himself. Jake asks if the captain will join him blowing out the candle to their cake the gesture almost moves Hook to tears and he would be honored. On the count of three, the two captains set to blow out the candle but Hook quickly blows out the candle which he responds with a sneaky chuckle "What did you expect, I never follow the rules. I'm Captain Hook". To which Jake chuckled "The one and only". 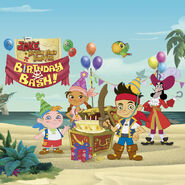 Add a photo to this gallery
Retrieved from "https://disney.fandom.com/wiki/Jake%27s_Birthday_Bash!?oldid=2703261"
Community content is available under CC-BY-SA unless otherwise noted.