Active
Jake is a kangaroo mouse and the tritagonist from Disney's 1990 animated feature film The Rescuers Down Under.

Jake is a slim, athletic kangaroo mouse with light brown fur and a long tail. His outfit resembles that of a safari, with a wide-brimmed hat and khaki shirt.

Jake is portrayed as a typical tough guy, always talking tough and about people he doesn't like (specifically Percival McLeach). He's also known to be fearless and, at times, sarcastic, showing no fear when facing a giant snake, and laughing at the prospect of Bernard saving the day (though he changes his mind at the end). However, his heart is in the right place. He cares deeply for his friends (especially Miss Bianca) and proves to be a valuable asset in the film. As seen from his (former) attraction to Miss Bianca, he appears to be flirtatious yet respectful and gentlemenly towards women.

When Bernard, Bianca, and Wilbur arrive in Australia, they go to the airport at Mugwomp Flats where Jake the kangaroo mouse works with Sparky the fly. Wilbur calls out to Jake over the radio and asks his permission to land, but when Jake finds out that Wilbur is an albatross, he tells Wilbur to turn around because the runway isn't big enough for a bird his size. Bernard tries to convince Wilbur to listen to Jake, but Wilbur won't listen and decides to land, causing Jake to call him a Crazy Yank. Jake and Sparky manage to extend the runway, and Wilbur lands safely on the runway. When Jake takes the stairs over to Wilbur so Bernard and Bianca can get off, still grumbling about Wilbur and calling him a Crazy Yank again, he sees Bianca and becomes smitten by her and offers to take her luggage instead of Bernard's to which Wilbur offers to take Bernard's bags. However, he has back problems and gives the bags back to Bernard. Jake tells Sparky to watch the tower while he, Bernard, and Bianca take Wilbur to the hospital.

After getting Wilbur to the hospital, Jake asks Bianca if she and her husband (Bernard) are on vacation. Bernard and Bianca explain that they're not married and are there on a secret mission, to which Jake says, "Gotta rescue the kid McLeach nipped." Bernard and Bianca ask Jake how he knows that to which Jake replies, "Hard to keep secrets in the outback." He also tells them that a map isn't good to use in the Outback, and they need someone like him "who knows the territory." As such, he offers to be their guide across the Outback to reach McLeach's lair. While traveling on a wombat, Jake puts his hand around Bianca, much to Bernard's annoyance, who the wombat sends flying into a tree of thorns. Later, when Bernard and Bianca are alone, Bernard tries to propose marriage to Bianca, but then Jake shows up with a hungry snake named Twister, but Jake manages to show the snake who's boss by catching hold of Twister and telling him that he's gonna take him, Bianca, and Bernard on their long journey and not give them any trouble about it, to which Twister agrees to do.

Jake and Bianca ride on Twister's head while Bernard rides sadly on Twister's back, looking at the engagement ring and worrying that Bianca will fall in love with Jake instead of him. That night, Jake is seen riding fireflies with Bernard and Bianca, showing to have a strong like for it. The next day, Jake, Bianca, and Bernard arrive at McLeach's lair and Bernard suggests that they try to dig in, to which Jake replies, "Anyone considered trying 'Open Sesame'?" To which the doors open by coincidence, and the mice watch in horror as McLeach emerges and lets Cody go, telling him that his bird Marahute is dead and that her eggs won't survive without her.

When Bernard asks, "Why is he letting him go?" Jake replies, "It's gotta be a trick." To which Jake is right as McLeach and his pet lizard Joanna secretly follow Cody in his truck but Jake, Bianca, and Bernard manage to jump on. When they arrive at the top of the cliff, Jake, Bianca, and Bernard go down to where Cody is at Marahute's nest and try to warn him about McLeach, but before they can, Cody hears Marahute and sees her approaching the nest, but then Jake, Bernard, and Bianca give their warning about McLeach and Cody looks up and sees the poacher setting his trap and he tries to warn Marahute but is too late. Cody, Marahute, Jake, and Bianca are all trapped in the back of McLeach's truck, but luckily Bernard manages to escape and save Marahute's eggs from Joanna.

On the way to Crocodile Falls, Bianca tells Cody that they mustn't lose hope because Bernard is still out there, to which Jake replies jokingly that if anyone can get us out of here it's Bernard. He then whispers to Bianca she did a nice bluff, to which she tells him that she wasn't bluffing because she trusts Bernard and knows he will never give up. At Crocodile Falls, Jake, Bianca, and Marahute watch helplessly as McLeach lifts Cody over the water with the crane on his truck but there is nothing the mice can do, but as he's about to kill the boy, the engine goes dead and while the evil poacher looks in the cab of his truck for the keys, Bernard appears with the keys to which Jake replies, "Way to go, mate!" Bernard throws the keys to Jake and Bianca, who try to break free.

McLeach grabs his gun and begins shooting at the rope, which was holding Cody, but Bernard manages to distract Joanna and sends both her and McLeach into the water, sending the lizard to safety on a rock and the poacher to his death over the waterfall. Then the rope breaks, sending Cody into the water, but Bernard jumps in and holds the rope holding the boy but the rushing water sends them both towards the waterfall, but luckily, Jake, Bianca, and Marahute break free of the cage and swoop down on their friends, rescuing them before they can be lost forever. Cody thanks Bernard for saving his life and Bernard asks Bianca to marry him to which she says yes. Jake gives Bernard the thumbs up and winks at Bernard saying, "Well done, mate." They then all fly on Marahute to go home. 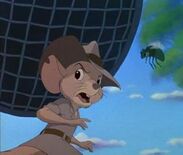 Jake and Bernard looking at the map

Jake about to kick out a pin 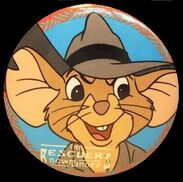 a Button with Jake 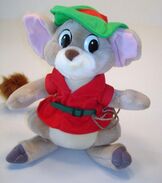 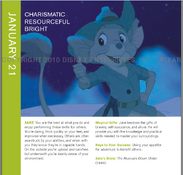