Start a Wiki
All info was provided by: http://hannahmontana.wikia.com/wiki/Jake_Ryan

Leslie "Jake" Ryan (born April 3, 1990) (age 28) is a famous actor, and Miley Stewart's sometimes boyfriend. Unlike Miley, he has not chosen to live as both a regular person and a star, and he finds it difficult not to be a star when he tries. He was played by Cody Linley.

Jake is one of Miley's love interests. They share an off and on relationship. He was a new kid in Miley's middle school. He initially annoyed Miley with his self-centered attitude, but they developed crushes on each other.

The two tried to make each other jealous by dating other people, which didn't work out too well. Jake kissed Miley, but on the same day, he left for Romania. He wasn't seen again until the second season, where he continually tried to get Miley to take him back by sending her various gifts such as muffins and flowers.

On live television he confessed that he was in love with her and shortly after, the two reconciled. They tried to date and Miley even told Jake of her "Hannah secret". However, Jake's celebrity attitude annoyed Miley and the two broke up. In the third season, Miley tried to stop Jake from marrying Traci, only to find out that she'd been "Gotcha'd". Miley went so far as to kiss Jake to prove that she didn't feel anything for him.

However, Miley and Jake both showed signs of enjoying it. They start secretly dating once again in "He Could Be the One". They eventually tell Miley's father of their relationship, but even when he accepts it, their relationship faces another hardship as Miley crushes on her fellow guitarist. At the end of the episode, Miley realizes she loves Jake more and reaffirms her relationship with him. In "It's the End of the Jake as We Know It", it is found that Oliver's friend from his band took a picture of Jake nibbling on another girl's ear. Oliver told Lilly and decided to keep it a secret from Miley. In the end, Miley finds out and Jake and Miley break up for good. Miley later mentions him in "Been Here All Along", stating, "Now that I'm not with Jake anymore, nothing's stopping me and Jesse from being together." 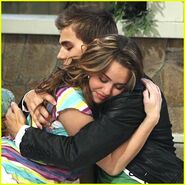 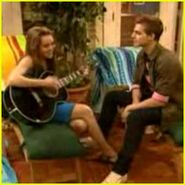 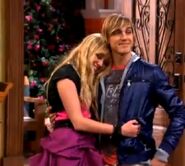 Miley breaks up with Jake for good

Jake calling Miley
Add a photo to this gallery

Retrieved from "https://disney.fandom.com/wiki/Jake_Ryan?oldid=3331526"
Community content is available under CC-BY-SA unless otherwise noted.