24 minutes (with some 49 minute specials)

Jake and the Never Land Pirates is an Annie Award-winning musical interactive animated Disney Junior show based on the successful Disney franchise, Peter Pan, that was in turn based on the famous book and play by British author J.M. Barrie. It is the first Disney Junior original show following the switch from Playhouse Disney.

The 4th season is known as Captain Jake and the Never Land Pirates, reflecting Jake's new outfit in the Season 3 finale.

Disney executives announced that the show was cancelled and would not receive a fifth season in light of Mickey and the Roadster Racers. The last episode aired on November 6, 2016. The show, since November 12, 2019, is on Disney+.

The series focuses on a band of young pirates consisting of Jake, Izzy, Cubby, their parrot Skully, and Bucky, their living pirate ship, who continuously spend their days competing against Captain Hook and Mr. Smee for treasure. They are often accompanied by several characters, including their mermaid friend Marina.

The show revolves around a group of three children who are pirates in Never Land, looking for treasure. They often have encounters with Captain Hook, Mr. Smee, Tick-Tock the Crocodile, Peter Pan, and Tinker Bell from Disney's Peter Pan franchise. Captain Hook usually sees Jake and his crew doing something fun and steals it from them, and Jake and his crew have to get it back. After they succeed, Jake and his crew count their gold doubloons (which they receive after solving puzzles, or "pirate problems") and put them in their treasure chest known as the "Team Treasure Chest." Jake inspires little children that when you need to find something, you should look for it and not give up for the evil and not well people to earn it.

The first season of the series followed more "playful" conflicts, such as Jake and the crew getting their basketball back from Captain Hook or Jake and the crew taking back their stolen skateboard. The second season gave a larger scale to the adventure in the show, now having the characters find a lost city of gold and an ancient pirate pyramid. Viewer interactivity was especially downplayed to further enrich the worlds, characters, and the episodes' plot. The 3rd season contained more action while retaining its kid-friendly tone. In addition, it introduced the Darlings from the first and second films in one special. Finally, the 4th season has the kids interact just once an episode.

Each program contains two eleven-minute animated episodes, followed by a live-action song by the Never Land Pirate Band. The singing characters "Bones" and "Sharky" appear in both animated and live-action forms. This is omitted in Season 4, as it is just Jake in different short clips in the end credits.

Jake
Voiced by Colin Ford (seasons 1-2), Cameron Boyce (seasons 2-3), Sean Ryan Fox (season 3), Riley Thomas Stewart (Jake's Buccaneer Blast, understudy in season 4), Gabe Eggerling (season 4)
Jake is an 8-year-old boy and the main protagonist of the series and leader of the Never Land Pirates. He has a wooden sword, created from the Forever Tree which was made and given to him by Peter Pan, and serves as Captain Hook's main pirate rival.
Izzy
Voiced by Madison Pettis (seasons 1-3), Megan Richie (season 4)
Izzy is a 6-year-old girl and second-in-command to Jake. She has a small sack of Pixie Dust, which was given to her by the fairies (Tinker Bell and her friends). The team only uses the pixie dust for emergencies. However, there have been episodes where pixie dust is not used at all. Her catchphrase is "Yay, hey, no way!"
Cubby
Voiced by Jonathan Morgan Heit (seasons 1-3), Jadon Sand (Jake's Buccaneer Blast and seasons 3-4)
Cubby is a 5-year-old boy and the youngest of the group with his catchphrase, "Aw, coconuts!". He has the map of Never Land, and he is not a member of the Lost Boys, despite the fact he physically resembles the Cubby of the group. His personality is rather timid, and he is not very confident in himself.
Skully
Voiced by David Arquette
Skully is a small green parrot who acts like a guardian to the team. He keeps a lookout for Captain Hook and Mr. Smee. His catchphrase is "Crackers!". Loren Hoskins provided Skully's singing voice.
Captain Hook
Voiced by Corey Burton
Captain Hook is Neverland's resident pirate captain and the main antagonist of the series. Commander of the galleon "The Jolly Roger" and legendary for his cruelty to his enemies as well as to his own men, Hook has trouble holding onto a permanent crew. In fact, at the moment, he holds only three crew members. Hook is seen to be completely hopeless without the constant aid of Mr. Smee. He's also considerably "nicer" and more playful in this show than in the Peter Pan franchise, probably due to the absence of Peter Pan, and a much smaller (and loyal) crew.
Mr. Smee
Voiced by Jeff Bennett
Mr. Smee is Captain Hook's "left-hand man", first mate, and the secondary antagonist of the series. Despite him working for the bad side, he still is quite a kind and generous man.
Sharky and Bones
Voiced by Loren Hoskins and Jeff Bennett
Sharky and Bones are members of Captain Hook's pirate crew. They usually spend time performing musical numbers rather than advancing the plot, acting as troubadours or Greek Chorus. Both Loren Hoskins and Kevin Hendrickson, specialists in a music form called "Pirate Rock," were asked by Disney to write the music and lyrics for all the songs for the show. Kevin Hendrickson provided Bones' singing voice.
Marina
Voiced by Ariel Winter
A young mermaid who lives in the ocean around Never Land with the rest of her fellow mermaids. Unlike some of the mermaids, who tend to be snobbish, selfish, and vain, Marina is gentle and kind to the young pirates. She often shows them the secrets of the Never Sea she finds. Marina and Izzy are very close friends and may even be the same age. Like Izzy, Marina is rumored to be a love interest of Jake. Marina also has a little sister named Stormy.
Bucky
Jake, Izzy, and Cubby's pirate ship, who has a mind of its own and communicates with the crew through its ringing ship bell.
Tick-Tock the Crocodile
Voiced by Dee Bradley Baker
The very same crocodile that devoured Hook's left hand after Peter Pan cut it off in a sword fight some years ago. Tick-Tock loved the taste of Hook's hand so well, he has followed the Jolly Roger ever since, licking his chops as he imagines the rest of his meal. He also swallowed an alarm clock that goes "tick-tock" to warn Captain Hook of his presence.

The show's musical elements are handled by Loren Hoskins and Kevin Hendrickson, who were emailed asking if they would be interested in creating songs for the show. "The show's creator, Bobs Gannaway, he just wanted good music to listen to while he was writing the pilot", said Hoskins. Gannaway typed "pirate music for kids" into a web search engine and found his way to Captain Bogg & Salty, listening to their songs while working on the script. He introduced the band to Jay Stutler, vice president of music at Disney Television Animation. "We're in charge of creating every note of music for the show. "We create the underscore. "We sit in the studio and record the background music that comes in and out." The music for the show has been praised for being enjoyable for both the children and the adult caretakers. A soundtrack, featuring songs from the show, was released September 20, 2011.

The series received positive reviews. A review in Variety called it "part video game, part interactive cartoon, part advertisement for 'Peter Pan' merchandise".[1] A review in The Los Angeles Times stated that Captain Hook "has been laundered — reasonably enough, yet sadly as well — into a shell of his former self, too silly to be frightening, not even a decent bully, just a kind of (much) older boy who wants to steal your toys."[2] Common Sense Media rated it "on" for ages 3 and older, praising the educational content, role models, and especially the messages of the show, and expressing only mild concern about the moderate violence.[3] As the flagship of the newly-launched Disney Junior channel, the series was rated the most-watched program among boys ages 2–5 during its first few weeks on the air, with 2.9 million viewers, including 1.1 million ages 2–5, and over 600,000 women ages 18–49 (presumed to be mothers and other caregivers), only about 100,000 less than the typical Friday night first-ran episode on Disney Channel.[4] On July 27, 2011, the series was awarded #2 of the Best TV Shows 2011 list.[5] The series premiere got 2.2 million viewers. On February 13, 2012, Jake and the Never Land Pirates: Peter Pan Returns got a record 3.091 million viewers. It is cable TV's #1 series among Boys 2-5 and Disney Channel's #1 preschool series of all time among Total Viewers, Kids 2-5, Boys 2-5, and Women 18-49 [6] - more than any new program (Phineas and Ferb, ANT Farm, and Jessie) on the Friday before. For the second special Jake Saves Bucky, it only got 1.9 million, well less than the first special. The fourth special Jake and the Never Land Pirates: Battle for the Book it went up slightly to 1.93 million.

The character Jake has also received positive reviews. The character has been thought of as a "classic Disney character", lovable and entertaining addition. He has quickly become an icon at Disney's Hollywood Studios from the popular Disney Junior Liveas well as being added to the park's entrance drawings. The atmosphere character can be seen at the Hollywood And Vine character breakfast and the Animation courtyard, while at Disney California Adventure, Jake can be found on Hollywood Boulevard in the Hollywood Studios backlot.

On July 27, 2012, Disney announced a spin-off series of shorts of the show centering Skully. The series is titled Playing With Skully, and is a collection of short cartoons that aired on September 19, 2012. Another short series entitled Jake's Never Land Pirate School premiered on November 26, 2012. The third spin-off, Mama Hook Knows Best! premiered on September 29, 2013, starring Sharon Osbourne as Mama Hook, but instead of a series, it was a book. The fourth spin-off entitled, Jake's Buccaneer Blast premiered on October 26, 2014, as the first LEGO Duplo adventure and the first LEGO Disney show.

Upon the initial release of the series onwards, there has been a high demand for toys, games, and other merchandise from the show. At the American International Toy Fair in New York City, Disney announced a line of toys that were released in the summer of 2012. On July 16, 2012, the app Jake's Never Land Pirate School was released on the iPad and other Android devices. 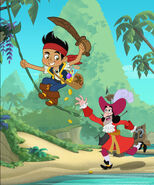 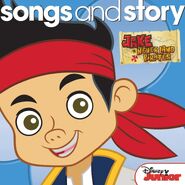 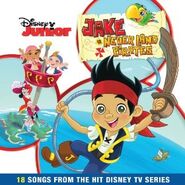 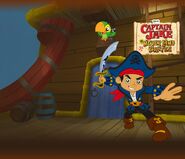