In their London home, Wendy Darling is reading stories of her and her brothers' adventures in Never Land with Peter Pan to John, Michael, and Nana. However, watching from Never Land, Captain Hook is furious at how he is pictured in Wendy's stories as a bumbling fool, losing to Peter Pan at every opportunity. Wanting revenge for his portrayal in Wendy's stories, he has Smee, Sharky, and Bones set course for London to steal the book and do away with it. The Jolly Roger is spotted by Jake and his crew, but they mistake it for just their imagination as they continue to watch the night sky.

Back in London, just as Wendy and her brothers are getting ready to go to bed, Hook arrives to steal the story book. Despite their attempts to stop him, Hook gets the book and makes good his escape into London. As John and Michael try to figure out what to do, Wendy decides to contact Peter to help them via a song that can alert Peter that she needs his help.

Speaking of Peter, he's busy dealing with a sea monster that is threatening Queen Coralie, Marina, and Stormy. When Tinker Bell arrives to tell him of Wendy's call for help, unable to answer it since he's busy with the sea monster, Peter assigns Tinker Bell to contact Jake and his crew, giving her his hat so he can speak to them through it to tell them what to do. When Tinker Bell finds Jake and his mateys, Peter explains the situation to them, and they set off on Bucky to head to London, being amazed by the sight of the British capital as they arrive to locate the Darling house.

When they arrive, the Darling children mistake them for being with Hook, but once Jake explains they're allied with Peter Pan, they set off on Bucky to find the Jolly Roger, which has become lost in the fog surrounding London. During the search, Michael begins to show signs of forgetting about Peter Pan and Never Land. When they find Hook, the team is forced to split up from Bucky to confront Hook on the Jolly Roger. In the scuffle, Hook escapes to the streets below, and while Jake, Wendy, Izzy, and John pursue him, Cubby, Skully, Michael, and Nana stay on the Jolly Roger to deal with Smee, Sharky, and Bones. During the pursuit, John begins to show signs of forgetting about Never Land as well. When the balloon keeping the ship airborne is ruptured, the ship splashes down next to a dock, grabbing the attention of a late-night patrolling police officer who chases after Smee, Sharky, and Bones. By the time Jake, Wendy, and the others catch up to Hook after he's collided with his crew, and Wendy's book is taken by the officer once he arrives on the scene, Hook's able to convince the officer that Wendy, Jake, and the kids are the bad guys, allowing him and his crew to escape back to the Jolly Roger as the fog clears so they can return to Never Land. Jake, Wendy, and the rest of the gang try to convince the officer of the truth, but it's not until he sees Tinker Bell himself does he realize he's been tricked and lets the kids go to pursue Hook, getting a kiss of thanks from Tinker Bell in the process.

By the time Bucky returns to Never Land, they've lost sight of Hook, however, remembering the Lost Boys' old hideout, Wendy takes Jake and his crew there to use the secret tunnels to find Hook, only to find that Hook is heading for the Valley of Fury to destroy the book in the pit of blue fire located there. Along the way, Wendy begins to show signs of forgetting about Peter Pan and Never Land just like her brothers, but when Peter himself shows up, Wendy remembers, and the team head to the Valley of Fury.

When they get there, Hook nearly succeeds in destroying the book, but a sudden geyser of flames causes a gust of wind that causes the pages from the book to be scattered, resulting in where Hook and his crew begin to show signs of amnesia themselves alongside the Darling children. As Peter, Jake, Wendy, and the others collect the pages, Peter soon realizes that Wendy's book might be magical in that, with the pages missing, it is causing her, her brothers, and even Hook and his crew to forget all about their adventures in Never Land.

When they locate the last page, Hook gets it first, but too amnesic to remember why he wanted it in the first place, it is not until he reads it himself that he discovers that Wendy had been writing about him and actually describing him much better than the blundering buffoon he originally pictured himself as. Touched, Hook is about to return the page, but another gust of wind blows it back to the Valley of Fury, where it is nearly destroyed by the flames before Jake and Hook, working together, manage to save the singed page from destruction. Once returned to Wendy's book, the pages magically restore themselves back to their original order, and the book, along with the Darlings, Hook, and his crew's memories, are restored.

Soon after, back in London, Wendy reads some of the stories to her brothers, Nana, Peter, Tinker Bell, Jake and his mateys, and even Captain Hook and his crew, though in the end, the good guys all have a laugh as Hook hangs on for dear life from the edge of the roof and calls out to Smee, Sharky, and Bones to save him. 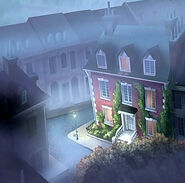 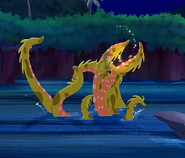 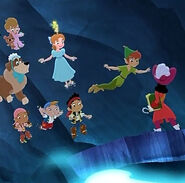 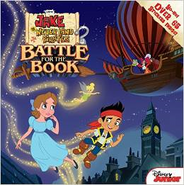 Retrieved from "https://disney.fandom.com/wiki/Jake_and_the_Never_Land_Pirates:_Battle_for_the_Book?oldid=3947686"
Community content is available under CC-BY-SA unless otherwise noted.