“The end of Peter Pan once and for all!”
―Captain Hook[src]

"Peter Pan Returns" is a special 1-hour episode of Jake and the Never Land Pirates. It premiered in primetime at 7 PM US EST/PST on February 13, 2012, on Disney Channel.

One night, Peter Pan's Shadow makes way for Never Land and visits the Jolly Roger: the ship of the villainous Captain Hook. There, he bothers Hook and his crew by awakening them from their slumber. Meanwhile, Peter Pan himself visits Pirate Island and reunites with his pirate team insisting of Jake, Izzy, Cubby and Skully. He informs them of the missing shadow and the friends set off to find it. Back on the Jolly Roger, the shadow has proceeded in revealing itself. This alerts Hook and the crew of Peter's presence in Never Land. The captain plots to capture the shadow and use it as hostage to lure Peter to him and get rid of him. However, the shadow proves to be elusive as a chase leads the pirates to be thrown overboard and the Jolly Roger to be taken over by the shadow. The shadow, and the villain pirates, make way for Never Land. Once there, Hook finally bags the shadow. Peter, Jake and the crew begin their search on the shore of Never Land where they find a note from Hook informing them of the impounded shadow. The heroes set off to meet Hook at Buccaneers Bluff to settle the score. Instead, Hook attempts to force the heroes out of Never Land for the safety of the shadow.

Peter rejects the offer resulting into Hook and his crew taking the shadow to The Valley of Shadows. As the name suggests, the valley is filled with shadows made by various things. As the plan goes, Hook will unleash the shadow there so that Peter will never find it. As Peter and the crew make way for the valley, Peter's flight begins to die down. Being that Peter's thoughts are filled with worries about his shadow, he's beginning to lose his flight as it can only be accessed through happy thoughts. Unfortunately for Hook, Peter and Jake arrive on time. Instead, Hook decides to sink the shadow to the bottom of the Never Sea. Using Bucky, Peter Jake and the crew catches up to the Jolly Roger. A battle follows including events such as Izzy, Cubby and Skully getting trapped under the sail and Jake grabbing the chest with Peter's shadow inside but his vest is caught by Captain Hook's hook, the fight ends with the shadow being reattached to Peter, the villains falling overboard, and the crocodile chasing after them. In celebration of the success, Peter, Jake, Izzy, Cubby and Skully fly through Pirate Island. Much to the young pirates' surprise, Peter and his shadow are now ready to depart to explore new parts of the world and discover new adventures. The friends bid farewell to their friend. Right after, Hook, Smee, Sharky and Bones are seen on a spit of land watching in horror as Tick-Tock the Crocodile and a large float of hungry crocodiles begin to swarm around Hook. 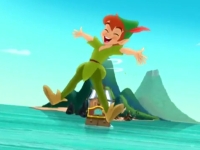 Peter sets off with Jake and the crew 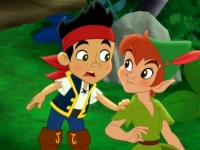 Jake learns the dreadful side effect of Peter's missing shadow 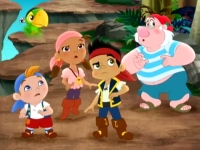 The reaction to Hook's proposition

The team is ready for action! 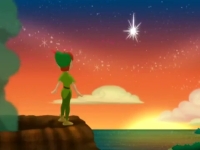 Peter gazing at the Second Star to the Right

The cover to the DVD release 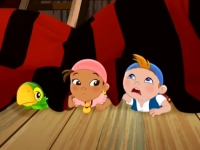