Jakku is a desert planet from the Star Wars universe. It is featured in Star Wars: The Force Awakens.

It is home to a mixed group of aliens, thugs, pirates, and other creatures. Lor San Tekka lived peacefully on the planet until he was killed by Kylo Ren for refusing to tell him where he hid the map containing the location of Luke Skywalker. Rey used to live as a scavenger on Jakku until she met Finn, Han Solo, and Chewbacca. It's also where the Battle of Jakku, the final battle of the Galactic Civil War, took place.

Jakku is a desert planet in the system of the same name. During the reign of the Galactic Empire, Palpatine commissioned an archaeological dig on the planet and assigned his friend Gallius Rax, a native of Jakku, to guard it. Twenty four years later, the Galactic Empire was dealt a devastating blow during the Battle of Endor: The Death Star II was destroyed and Emperor Palpatine and everyone else who was onboard were killed. This defeat left the Imperial military crippled. Also because Emperor Palpatine intentionally destroyed the Imperial bureaucracy when he dissolved the Imperial Senate, there was no one to fill the power vacuum that his death caused. Due to this, the Empire collapsed to the infighting the succession crisis caused.

Meanwhile, the Rebel Alliance declared itself the New Republic and many worlds flocked to join it further weakening the Empire. Desperate, Imperial Loyalists under the command of Gallius Rax (now an Admiral by this time) decided to make one last stand in the Battle of Jakku a year after the Battle of Endor. In the battle that followed both on the ground and in the sky, the New Republic drove back and destroyed much of the Imperial Forces. According to firsthand and secondhand accounts, Luke Skywalker was present for this battle, and used the Force to pull down at least one or more Star Destroyers in orbit from the sky.

Among the casualties was the Super Star Destroyer Ravager, the very last of the three Super Star Destroyers built by the Empire. The Imperials were badly defeated and retreated into Unknown Space where they learned that the rest of the Empire had signed the Galactic Concordance, ending the Galactic Civil War. The Imperials who retreated into the Unknown Regions, regrouped under the leadership of Snoke and became the First Order.

Many years after the Battle of Jakku, Kylo Ren traveled to Jakku searching for the map to the missing Luke Skywalker. One pilot of the Resistance, Poe Dameron, hid the map inside his droid companion BB-8. After the First Order massacred and burned down a local village, Poe attemped to attack Kylo Ren, but he is restrained and captured to be interrogated by the dark sider. The droid is found by a scavenger, Rey, that saved him from being sold and disassembled by local alien.

After Poe escaped the First Order with the help of a stormtrooper defector that he renamed as Finn, he drove to Jakku intending to recover his droid. But their fleeing ship is pursued and attacked by the First Order, resulting in them crash-landing on the Jakku desert. Not finding Poe after the crash, Finn wondered in the desert, eventually arriving at the Niima Outpost where he met BB-8 and Rey. The trio is then found by a group of Stormtroopers, forcing them to board the Millennium Falcon and escape the planet.

In Disneyland, Jakku is one of the possible destinations that can be encountered in Star Tours: The Adventures Continue. In the scene, the StarSpeeder exits hyperspace into the Starship Graveyard, where a squadron of First Order TIE fighters are pursuing Finn in the Millennium Falcon through a series of wrecked Imperial Star Destroyers. 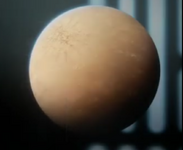 Concept art of Rey on the junkyard world.

Rey drives by the ruins of an Imperial Star Destroyer and a T-65B X-wing on the surface of Jakku.

The AT-AT that Rey used as home while she lived on Jakku.

During the uprising against the First Order, a Resurgent Star Destroyer was destroyed and crashed near the wreckage of an Imperial Star Destroyer.
Add a photo to this gallery

Retrieved from "https://disney.fandom.com/wiki/Jakku?oldid=4530130"
Community content is available under CC-BY-SA unless otherwise noted.