James Blake
Jameela Alia Burton-Jamil or simply known as Jameela Jamil is a British actress, model, body positivity activist, and radio presenter [1]. She is known for her roles as Tahani Al-Jamil from NBC's The Good Place and was the first solo female presenter of the BBC Radio 1 Chart show [2].

For Disney, she voiced a rebooted version of Gandra Dee in DuckTales and plays Aunt Pushpa in Mira, Royal Detective and Phoenix the dog in Big City Greens in the episode "Animal Farm". 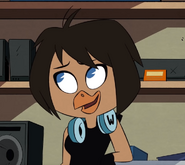 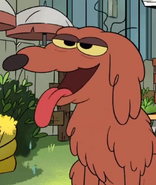 Pushpa
(Mira, Royal Detective)
Add a photo to this gallery

Jameela Jamil speaks at The Good Place panel at the 2016 Summer TCA Tour.

Jameela Jamil speaks at the 2019 New York Comic Con.
Add a photo to this gallery

Retrieved from "https://disney.fandom.com/wiki/Jameela_Jamil?oldid=3994442"
Community content is available under CC-BY-SA unless otherwise noted.