The Princess and the Frog
Ralph Breaks the Internet (cameo)

Soldier in the U.S Army (AEF)

To open a restaurant

Gets killed in action in World War I

“Your daddy may not have gotten the place he always wanted, but he had something better. He had love!”
―Eudora to Tiana

James is Tiana's father in Disney's 2009 animated feature film, The Princess and the Frog. He was a hard-working family man whose dream was to have his own restaurant. Being a loving man, James took very good care of his family.

Although he almost never got what he wanted, he was a happy man, because he had what he needed, such as love, and never lost sight of what was really important. He gave Tiana practical advice about working hard that she took very seriously. He then made her promise that she would not lose sight of anything important either.

James was pressed into service and fought in World War I when the United States was provoked into joining the war. At some point, James was killed in action (K.I.A.) during the war, so he never got to see Tiana get her restaurant. As shown briefly in the film, he was awarded the Distinguished Service Cross (given for extreme gallantry and risk of life in actual combat with an armed enemy force).

James is first seen when Eudora takes Tiana home. Tiana stirs a pot of gumbo, to which she adds a bit of Tabasco sauce for extra flavor. Her father also tastes the gumbo and is very satisfied with its taste, so Tiana invites the neighbors over for gumbo, which they all enjoy. James explains to his daughter that whenever food tastes good, it brings happiness to many people. He then adds that when he opens up his own restaurant, he will attract more people to taste his food just as Tiana did with the gumbo. When Tiana looks up at Evangeline and wishes for her dreams to come true, James tells his daughter that wishes don't always make things happen, telling her that she has to work hard to make her dreams come true. Before putting Tiana to bed, James tells her that she should never forget that her father will always be with her. Then he and Eudora go to bed.

Years later, as an adult, Tiana has put the poster of her father's restaurant next to a portrait of her late father in a military uniform, as a reminder that he will always be with her. James later appears in two flashbacks: during the musical number "Dig a Little Deeper" where he is seen in Madame Odie's enchanted gumbo pot, and during Tiana's confrontation of Dr. Facilier where she explains that her father never got the restaurant he wanted, but he had what he truly needed. James' dream of a restaurant finally came true after Tiana and Naveen gathered the necessary money to buy the property from the Fenner Brothers. 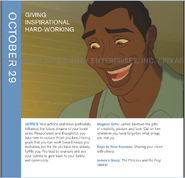 Retrieved from "https://disney.fandom.com/wiki/James_(The_Princess_and_the_Frog)?oldid=3989083"
Community content is available under CC-BY-SA unless otherwise noted.