2005–present
James Haig Adomian is an American actor, voice actor, comedian, and impressionist. He is best known for his work on Comedy Bang! Bang!, Chapo Trap House, and Last Comic Standing. He is also well known for voicing Talking Ben in the animated series Talking Tom and Friends.

For Disney, he voiced the Imperial Captain in the Star Wars Rebels episode "The Forgotten Droid". He also performed additional voices on Gravity Falls and Neighbor Jones in the DuckTales (2017 series) episode "What Ever Happened to Donald Duck?!"

Jones
(DuckTales 2017 reboot)
Add a photo to this gallery 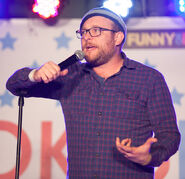